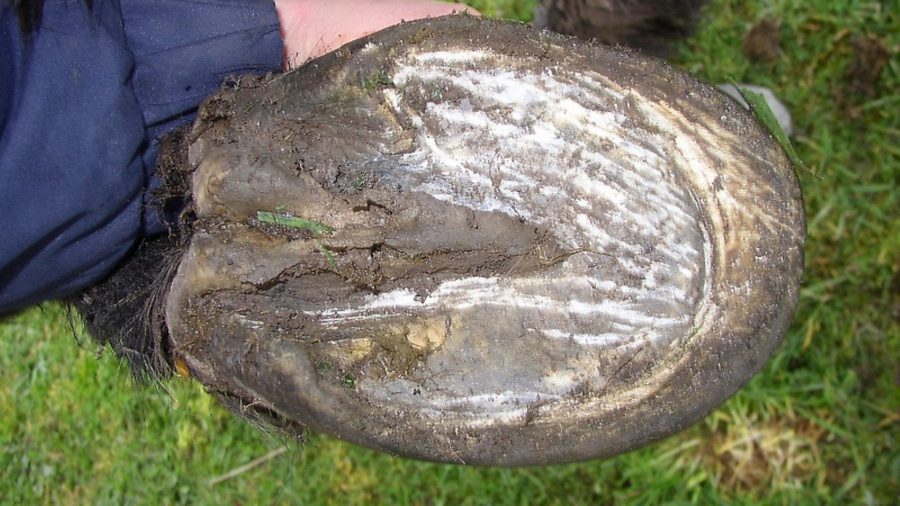 Looking after your horse’s feet should always be a top priority. Improper care of the equine foot, through lack of knowledge or simple inattention can lead to lameness for the horse and frustration for the owner.

StructureFirst, let’s take a look at the structure of the horse’s hoof. The outside of the hoof is a horny hoof wall, which grows downwards from the coronary band at the top of the hoof. When you lift the hoof up and look underneath, you will see the heel which looks like two bulbous structures. Pointing down from the heel is the spongy frog. The sole of the hoof is the flat (actually slightly concave) surface between the frog and the hoof wall. The foot has several functions: supporting weight, absorbing shock, providing grip or traction, and pumping blood. When the foot strikes the ground it expands to absorb the weight and then contracts when the foot is lifted. This also helps to pump the blood and maintain circulation in the horse’s foot. The front feet are a rounded shape at the toe, while the hind feet bear less weight and are more pointed to allow for better traction during propulsion.Internally the hoof consists of the pedal bone, the navicular bone and part of the pastern bone. The pedal bone is held in place by interlocking sensitive and insensitive laminae. The foot is well supplied with blood vessels and nerves.

Evolution of the horse’s footThe structure of the horse’s hoof is often used as concrete evidence of evolution. The pentadactyl limb (five digits at the end of a limb) is a feature of all animals with four limbs (the tetrapods), including us. It’s said that modern tetrapods evolved from a common ancestor that just happened to have five digits. Over many millions of years this basic structure was adapted, under different environmental pressures, to perform different functions.About 50 million years ago, the ancestor of the horse was much smaller and had three toes (two of the five digits had already become redundant). The horse gradually developed larger limbs and a larger hoof as they adapted to grassland habitats. With longer limbs and a strong hoof, they were able to travel further and faster. Interestingly, fossils show that horses developed teeth more suited to grazing than browsing as their habitat and diet changed.The modern horse has a large middle digit (the hoof) and reduced outer ones. Thus the horse is effectively running on the equivalent of the human middle finger. The horse’s knee is the equivalent of our wrist.

The need to shoeMany ponies may not need to be shod at all. In fact, if it’s possible to leave your pony barefoot then it’s probably better for him and cheaper for you. For example, a small children’s pony that is only used occasionally for leading around and patting and grooming will be fine without shoes. Similarly, some riding school ponies that are ridden in a ménage or field. Sometimes ponies are kept with front shoes on and back feet bare. The front feet bear more weight, and therefore wear down more quickly than the back ones. Furthermore, if many ponies are turned out in a field together, an unshod hoof will do less damage than a shod one during a skirmish.If you’re doing a lot of work on hard surfaces such as the road, then your pony will need shoes. Otherwise the hoof wall will wear down faster than it can grow and the pony will get sore feet.

When to call the farrierGenerally speaking, a horse or pony will need attention from a farrier every six weeks.A pony without shoes will need his feet trimmed to prevent the horn splitting and to keep the foot balanced. One sign that a pony with shoes needs to be reshod is when the foot becomes too long. When this happens the foot can spread and the hoof wall starts to grow over the top of the shoe. Other indicators include the presence of risen clenches (the nails that hold the shoe to the hoof wall rise out of the hoof wall), worn or obviously loose shoes, a shoe that has slipped out of place or come off.Farriers are notoriously difficult to get hold of. Try to book well in advance and make sure you’re ready for his visit. You will need a suitable place for him to work, ideally a flat non-slip surface, (concrete) that is covered over and has good light. Have your horse caught and ready for the farrier’s arrival and make sure someone is on hand to hold the horse if necessary. Your horse should have clean dry feet and be well accustomed to having his feet handled and picked up. If it’s your horse’s first time being shod, it’s only fair to warn your farrier.

A well shod footThe shoe should be shaped to fit the hoof, not the other way round. The hoof should rest evenly on the ground and the shoe should go right back to the heel to give support. The clenches should appear about one third of the way up the hoof wall and should be smoothed off. The front shoes have a single clip at the toe and the back shoes have two clips one on either side of the toe. Usually four nails are used on the outside of the hoof and three on the inside.

Very often when buying a horse or pony, it’s easy to overlook the quality of his feet. You can be so busy debating whether he’s safe in traffic, if he has a ewe neck or can he jump coloured poles, you forget to check the conformation of the feet.

When the horse is standing, his feet should all face towards the front. If a hoof is twisted inwards (pigeon toed), or outwards, the movement of the leg and the wear on the hoof is affected.A well balanced foot when viewed from the side should show an angle of about 45-50º to the ground, and this angle should continue through the pastern (just above the hoof). A broken hoof/pastern axis places more strain on the limb.Watch out for a horse with boxy feet (a steep angle) or one with flat feet (decreased angle). The former can be prone to jarring, if the hoof has reduced capacity for expansion when striking the ground. The latter may have flat soles and possibly, be more prone to bruising.

Foot care tips The quality of the horn is partly heredity and partly dependant on diet. A horse with poor feet may benefit from a hoof supplement in his feed.Hoof oils, varnishes and ointments applied to the hoof wall are not generally considered to be of any benefit. Nourishing ointments applied to the coronary band may help stimulate growth of the horn.- Check the feet daily. Use a hoof pick to clean out the foot and then check the shoes before riding.-  Hygiene – don’t let the pony stand on dirty bedding for long periods. Keep the stable as clean as possible. Similarly, don’t let your pony stand in very wet muddy paddocks to avoid the risk of him getting cracked heels.- Take care when riding over rough and stony ground. Slow down and let the pony pick his own way through.- Have your farrier visit regularly.