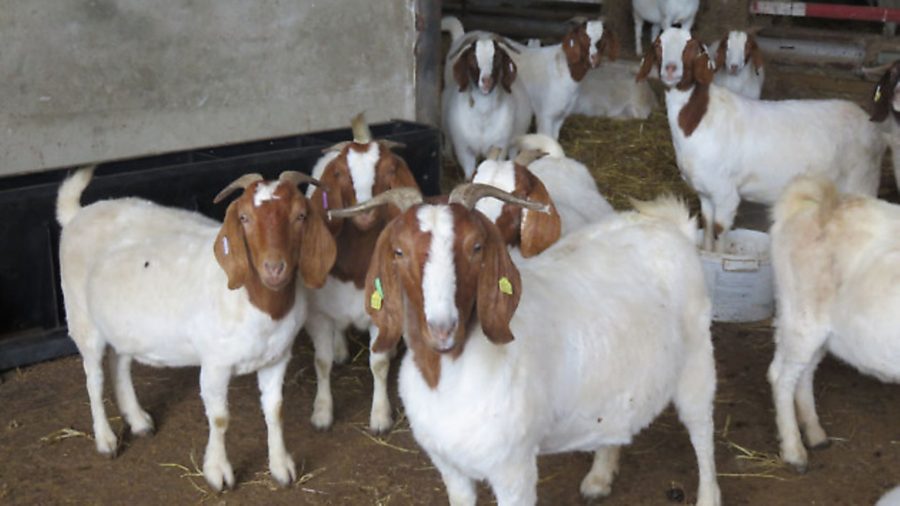 Debbie Kingsley talks to Avril Wooster, in Devon, who is passionate about keeping Boer goats 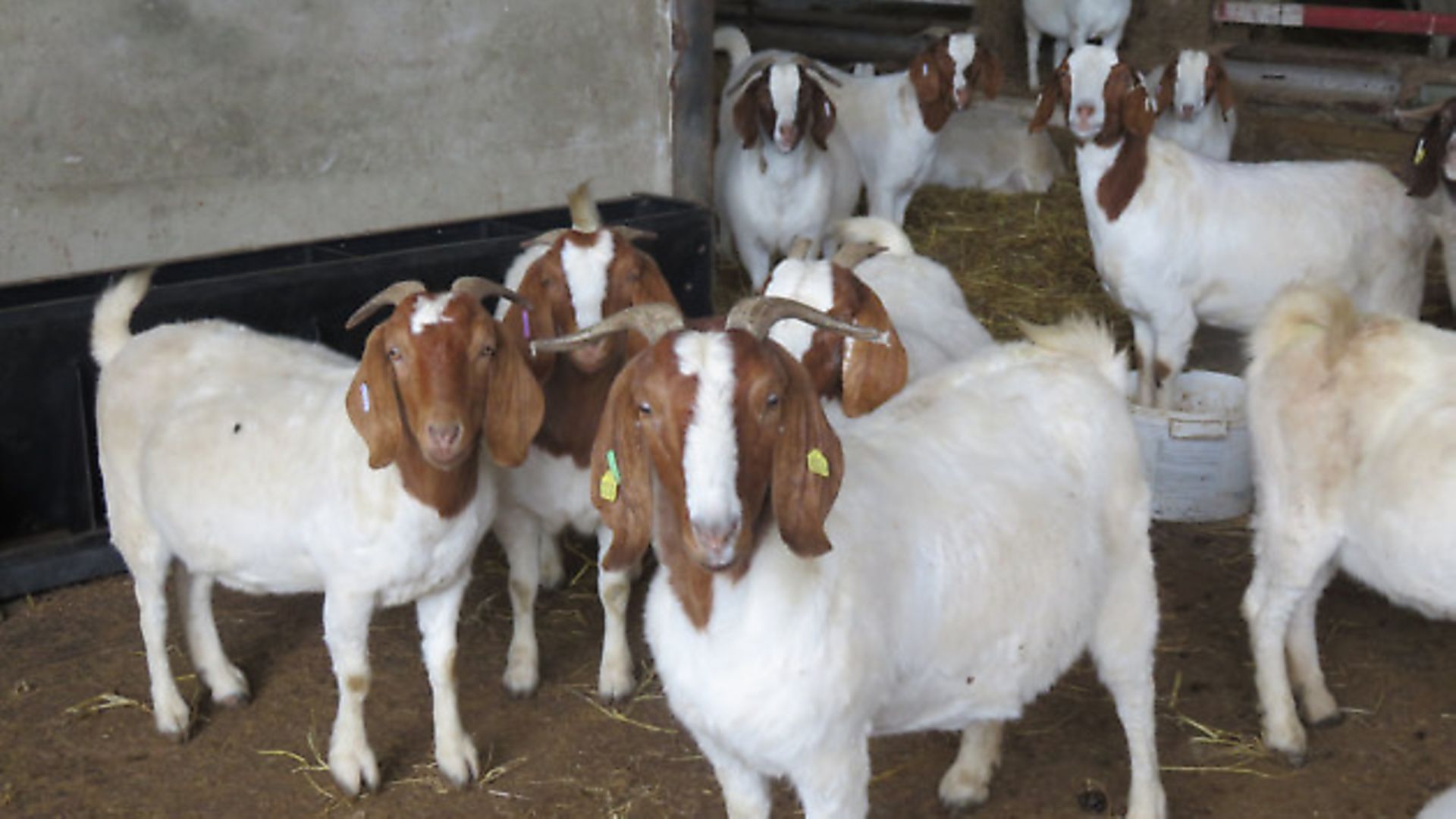 Avril Wooster and her husband Phil and came down to Devon from Hertfordshire 15 years ago. “I am a retired youth worker and Phil is a civil engineer working away up in Scotland all week, not ideal but, for now, a must,” she said. “We bought Lower Worth Farm, a 50-acre farm on the outskirts of the village of Northlew, near Okehampton, with a view to having a range of animals to breed and enjoy. We left a seven-acre stable yard we had built from scratch where we bred Arabian horses. We carried on the breeding when we came to Devon and started our own small herd of suckler cows, buying three Angus cross heifers; we still have two of them alongside nine more and their offspring. We sell the youngsters at market in the spring to make way for the next batch; some we keep if I fall in love with them. We also have ten horses here, a few are friends’ horses that they have retired down here with us.

“We wanted to have another breed of animals to farm and as Phil’s father used to keep goats we decided to look at what goats we could have. I didn’t want the hassle of milking and, after a lot of research, we decided on the Boer, as we felt it was a fairly new breed to the UK, it would fit in well with our other animals, and hopefully in time we would have a large productive herd. In 2012, we travelled the country looking at Boer breeders’ stock and, at first, we intended to start off with some that were part bred, percentage, and breed up to 100% females as they were cheaper to buy. Then, after a lot of thought, we took the goat by the horns and bought 12 female Boer kids all which were 100%, Grade 0. We then searched for our first stud buck and found a beautiful young lad, Beech Hay Hero, the founding daddy of our stock today. We saved and bought a few more from other breeders each year, including two more bucks, one a part bred Australian cross and another picked at a month old, who was an embryo transfer (ET) all the way from Australia that had been implanted into a surrogate mother in the UK. Sadly, we lost the Australian cross this year, but we still have Hero, his son Paulo to carry on the genes should anything happen to Hero, and Romeo the ET buck.

“We have imported females from Holland, Germany and this year bought some with Canadian/New Zealand bloodlines to add a wider genetic pool to our stock. We look at the characteristics in each of our bucks to improve the kids for meatiness in stud males and breeding females. Some we keep as we are aiming at a herd of 100 breeding females; some we sell as breeding stock and most boys we sell at weaning to people that run them on for meat. Our ethos is to have happy, healthy animals living as natural a life as possible. They live in groups according to age, and at breeding time, which is usually for us around September/October, they live in groups with their respective bucks. Young females won’t be bred until they’re 18 months old.

“We are so glad we chose the Boer goat as they are very easy to handle, even the huge males, and their temperament is calm and docile. All they want is to be stroked and brushed and they don’t mind a shower indoors if they are going to a show or British Boer Goat Society (BBGS) promotion. Even Hero has squashed in there before now; he is huge, and loves it. Goats do not usually like to get wet and run for cover when rain is approaching; they know before I do. It is very important that they have shelter out in their fields that they can get under when it rains as their coat isn’t like a sheep’s, it’s not waterproof.

“Our goats are out all day in the fields weather allowing, and they come in at night so we can check that nothing has happened during the day or one isn’t sick or feeling down for some reason. In the winter they are usually kept in once the fields start to get wet as they are happier in the barns, warm and toasty. They have ad-lib hay day and night, and are fed at night in summer, and morning and night in winter. They have various licks to supplement their mineral needs and, of course, plenty of fresh water and barley straw bedding.

“We have around 50 breeding females with 19 young girls waiting to go to the buck next year and three stud bucks and another ET Australian on order when born next year to add even more to the genetic pool and maybe a few more females too. Our herd is a high health status as we are CAE Accredited, CLA Negative and Scrapie Monitored and we only buy in from herds with a similar status. All the goats are on a regular vaccination and worming programme to ensure they stay healthy.

“The pros for breeding Boer goats is that their popularity is increasing and every year demand outstrips supply, and their meat is becoming more popular with butchers and chefs, who can’t get enough. The price per kilogram is a lot higher than lamb and we have found sheep farmers now venturing into Boer goats, testing the water with many having good outcomes. There are a lot of smallholders that produce their own meat that have herds and sell at farmers’ markets or the farm gate to pay for their keep. Boers are easy kidders and only once have we had one need a caesarean. Mostly, they kid on their own when my back is turned. If they do need help they are very amiable and seem to know you are doing it for their own good. I went on a lambing course at our vets before the first ones were due, which helped enormously. They are excellent mothers and cope well even with triplets. The cons…honestly, I can’t think of any other than needing good stock fencing.

“We show our goats at a couple of shows but I prefer to promote the breed at shows as I am passionate about them and could chat all day to people, that’s my addiction to the Boer. If I haven’t convinced you what a fantastic breed the Boer goat is then I give up! I am always willing to show people our Northlew Boer Goats and have a chat to anyone that is thinking of venturing into the breed.”