With winter fast approaching, small-scale farmers with buildings may want to consider housing their sheep and other livestock. Tim Tyne explains what facilities are required and what should be fed to animals either living in or out…

Although there may still be plenty of grass in the fields its quality is declining rapidly at this time of year, so early November generally marks the beginning of the winter management regime for livestock-keeping smallholders. How much use you’re able to make of grazed grass during the winter is dependant on many factors, not only relating to the type of livestock kept, but also to the type of land. It’s also necessary to think ahead to what use each field will be put to next year as your management over the winter will have a bearing on this. 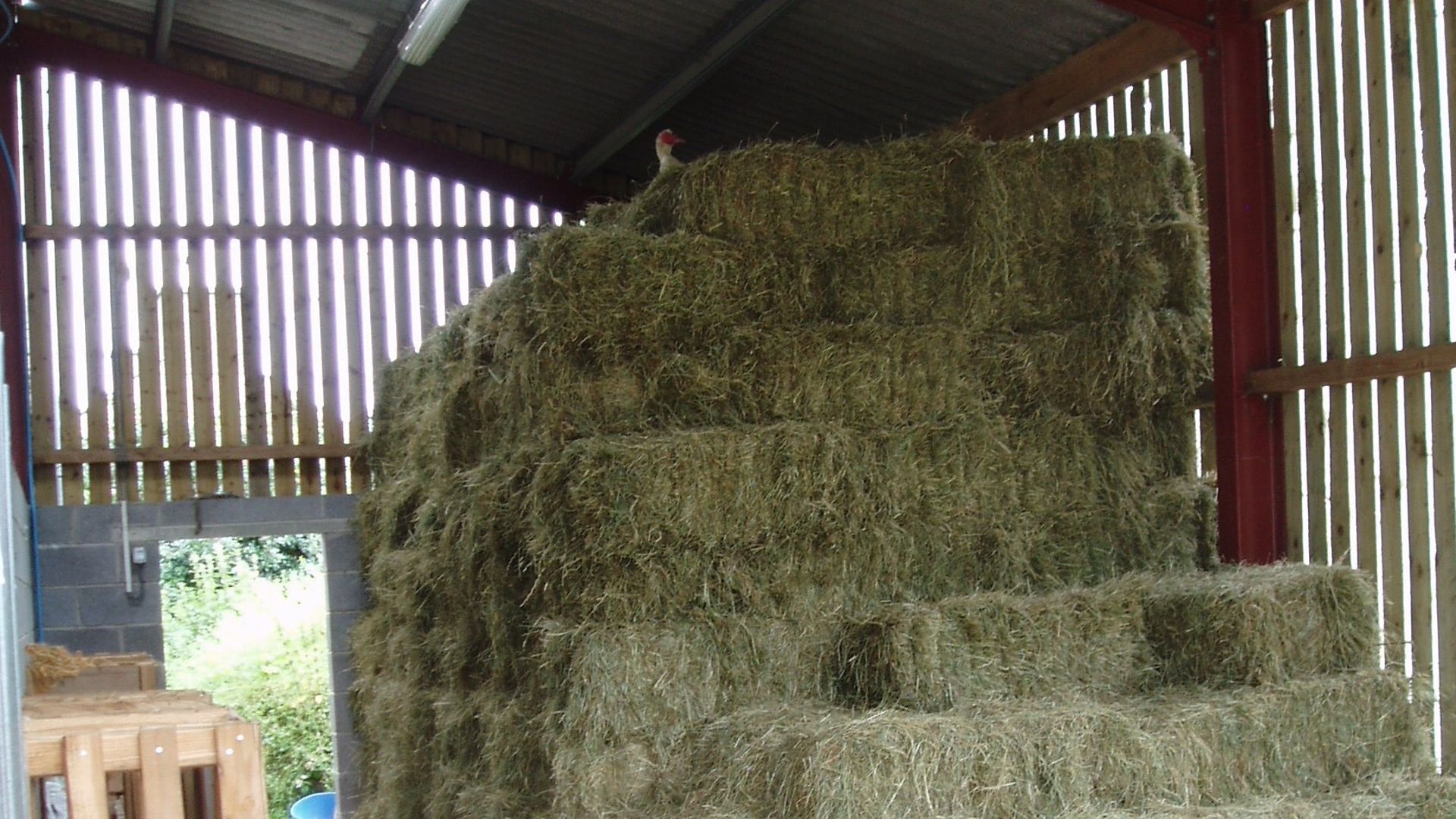 Do sheep need supplementary feeding in winter?
Most grazing species will require some supplementary feeding over the winter, so hopefully you will have made enough hay or silage to satisfy their demands. However, in the case of late lambing sheep flocks (particularly if of traditional or primitive breeds), their increased nutritional requirement during late gestation is likely to coincide with spring grass growth, in which case it might be possible to get away without providing additional feed. This does depend upon keeping the fields in good shape over the winter, which may prove to be difficult on a small acreage with high stocking rates, particularly if the land is poorly drained.

Excessive ‘poaching’ (damage caused to the sward and soil structure by the action of hooves on wet ground) will delay subsequent grass growth and, when the sward does recover, it’s likely to be of reduced nutritional value. This will impact on the health, welfare and productivity of the livestock that graze it, unless supplementary feed is provided. In effect, poor grazing management over the winter may negate the supposed benefits of keeping hardy native breeds.

Do I need to house my sheep over winter?
In many respects, it is better to house livestock for all or part of the winter period. If you’re going to have to carry feed to them anyway, you might as well do it in reasonable comfort rather than by trudging around in the wind and the rain. It gives the land a rest too, ensuring that in the spring there will be plenty of fresh grass for your ewes and lambs when they really need it.

Even in May lambing flocks, there are definite advantages to housing them through the later part of the winter on a basic maintenance diet of conserved forage before turning them out into clean fresh fields to give birth to their lambs. If you get the management right you probably won’t have to feed any concentrates at all.

Minimising “poaching” damage to grazing in winter
Whereas sheep are generally only housed for part of the winter (if at all), it’s common practice to keep cattle indoors from early November right through to late April/early May, although I appreciate that not everyone has the luxury of suitable buildings to enable them to do this. When cattle are outwintered they will cause more damage through poaching than sheep do, simply by virtue of their size and weight.

The usual way around this is to make use of a ‘sacrifice area’ for supplementary feeding. This could be a rough bit of ground that’s of no use for anything else, or a field that you’re intending to plough up and reseed the following spring (hence my earlier comment about needing to know what the future use of your fields will be). Another way of minimising damage is to move the feeding area on a daily basis, but this is hardly practical where hayracks or ring feeders may contain several days’ worth of forage.

On balance, I feel that it’s preferable for small-scale livestock keepers to house their animals through the worst of the winter and give the land a proper rest. Besides, sheep and cattle always look so miserable standing around in the rain and the mud, particularly in cold weather. Given the choice, I’m sure they’d rather be tucked up in a clean straw bed with a roof over their heads. 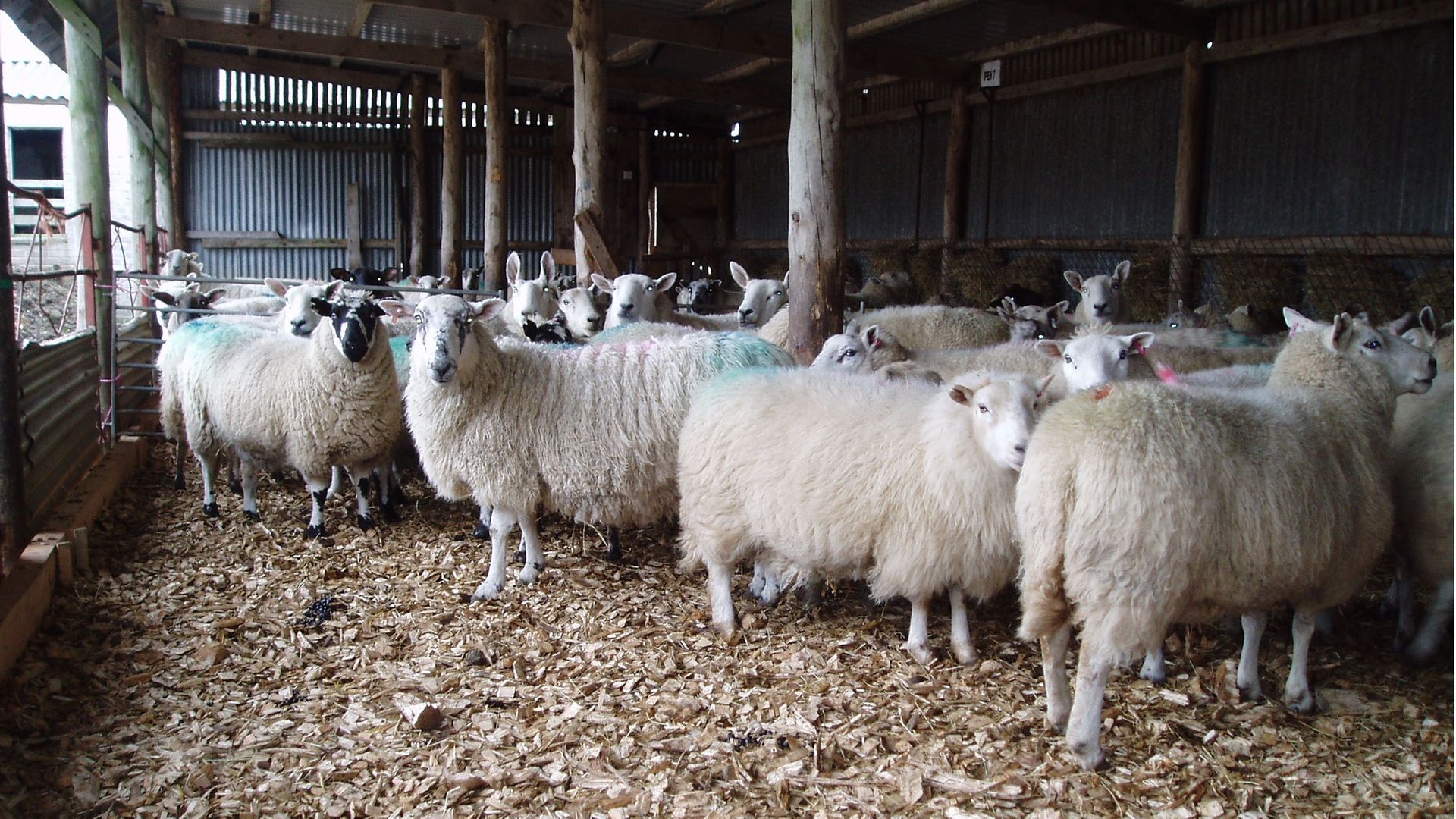 Different types of livestock housing
Winter housing for livestock doesn’t need to be elaborate. In fact, it’s often the case that the simplest solution is the best. Just a basic roof on legs will do, with perhaps some cladding on one or two sides to provide shelter from the prevailing wind direction. Ventilation is key, so provided that you keep the rain off and reduce draughts up to animal height the rest can be open.

Traditional outbuildings are notoriously bad for housing livestock due to restricted air flow. Most were built at a time when it was believed that animals should be kept warm and ‘cwtchy’, but they must have suffered terribly with respiratory disorders. In fact, the temperature in a sheep or cattle building shouldn’t really be any higher than outside. It’s shelter that’s required, not warmth.

If your finances won’t stretch to purpose-built livestock housing, then a simple pole-barn structure can easily be constructed using recycled materials at minimal cost. Alternatives such as polytunnels or even marquees are also worth considering, although their useful lifespan is likely to be limited. 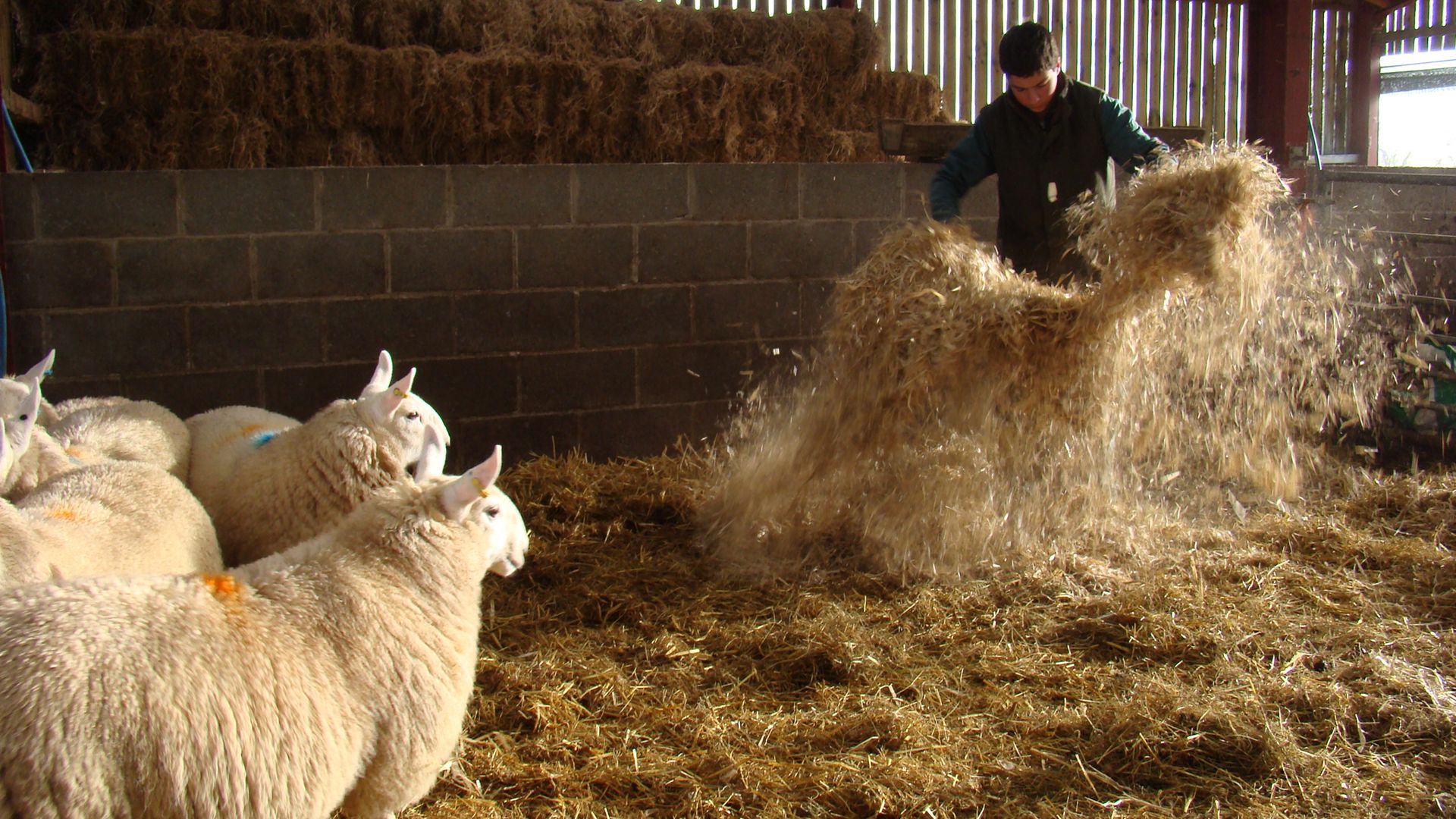 Which bedding is best for housed livestock?
The usual bedding material for housed livestock is straw. Ideally this should be greyish crumbly barley straw. The bright yellow stuff that always looks so nice when you first spread it about is actually not so good, as it’s less absorbent.

Unfortunately, most smallholders aren’t in a position to be able to produce their own straw (which is a by-product of cereal growing), and buying it in can be costly, particularly if you live in the western region of the UK where relatively few cereal crops are grown.

Substitutes for straw, which may be available locally or produced on the smallholding, include dried bracken, rushes, or even woodchip. Waste paper crumble is also popular in some areas, particularly for bedding cattle. Alternatively, adult cattle can be housed in stalls or cubicles with rubber mats to lie on, which eliminates the bedding requirement altogether and makes them very easy to keep clean. 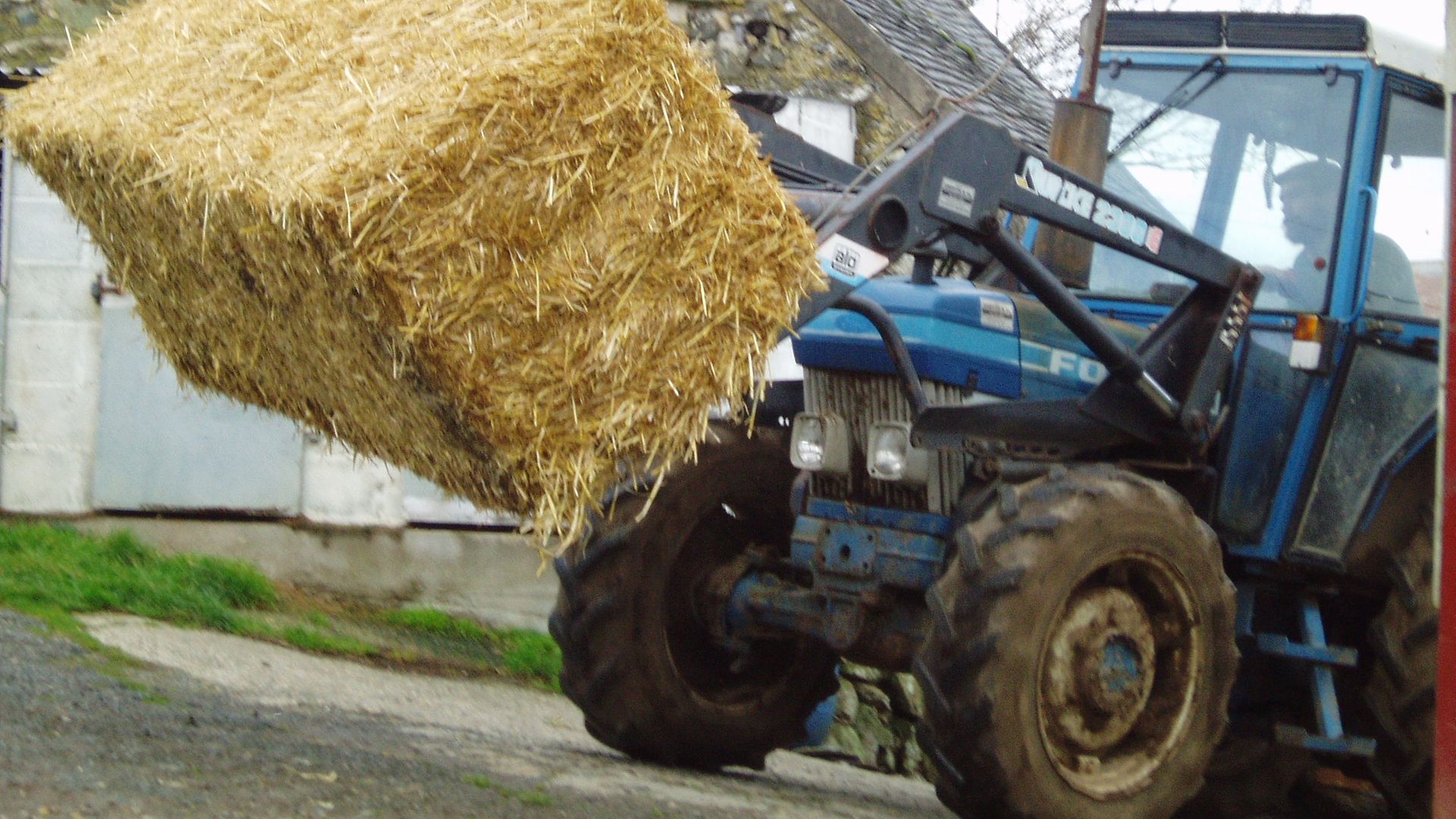 Should I feed livestock hay or silage?
Firstly, what’s the difference between hay and silage? Well, hay is simply grass that’s been dried (by cutting it and leaving it lying in the sun, and turning it from time to time), whereas the grass used for making silage is collected while it’s still moist and preserved by fermentation/pickling under anaerobic conditions (by sealing it into bales or a clamp). Very high dry matter silage has been nicknamed ‘haylage’, but I think that’s just a marketing ploy to encourage smallholders and horse owners who would normally shy away from using silage to buy it.

Silage is nutritionally superior to hay and usually more palatable (on account of its moisture content). However, hay is often easier and more pleasant to handle. The two biggest advantages of silage are the fact that making it requires a shorter fair weather window and that once baled and wrapped it can be stored outdoors. A considerable disadvantage is the problem of disposing of the used plastic wrap once the bales have been consumed.

Big bales of silage will require a tractor and loader/bale spike to move them around, although some contractors do now have specialist machinery to enable them to make ‘smallholder-friendly’ sized round or square wrapped bales. These are quite popular for producing haylage for sale to horse owners. However, if you have the means to move them, big bales of silage, hay or straw are much more convenient than little ones, as a lot of double handling is eliminated.

Although hay will keep for several years under ideal storage conditions, a bale of silage will begin to deteriorate fairly quickly if the plastic wrap becomes damaged. Likewise, once a bale of silage has been opened, it needs to be used up before it goes off. Therefore, big bales of silage probably aren’t worth considering unless you’ve got more than about 20 sheep, a couple of cows, or 8-10 goats.

The cost of production (including contractor’s charges) for the two is more or less the same, although there is the additional cost of wrap to consider when making silage. This can be offset against the saving you make by not having to construct a building in which to store it.

If you’re intending to do the harvesting yourself then the older style machinery required for making small bale hay can be purchased relatively cheaply, although you might end up spending more time repairing it than actually using it! If you’re buying in conserved forage (or straw) then small bales are the most expensive option on a per tonne basis. 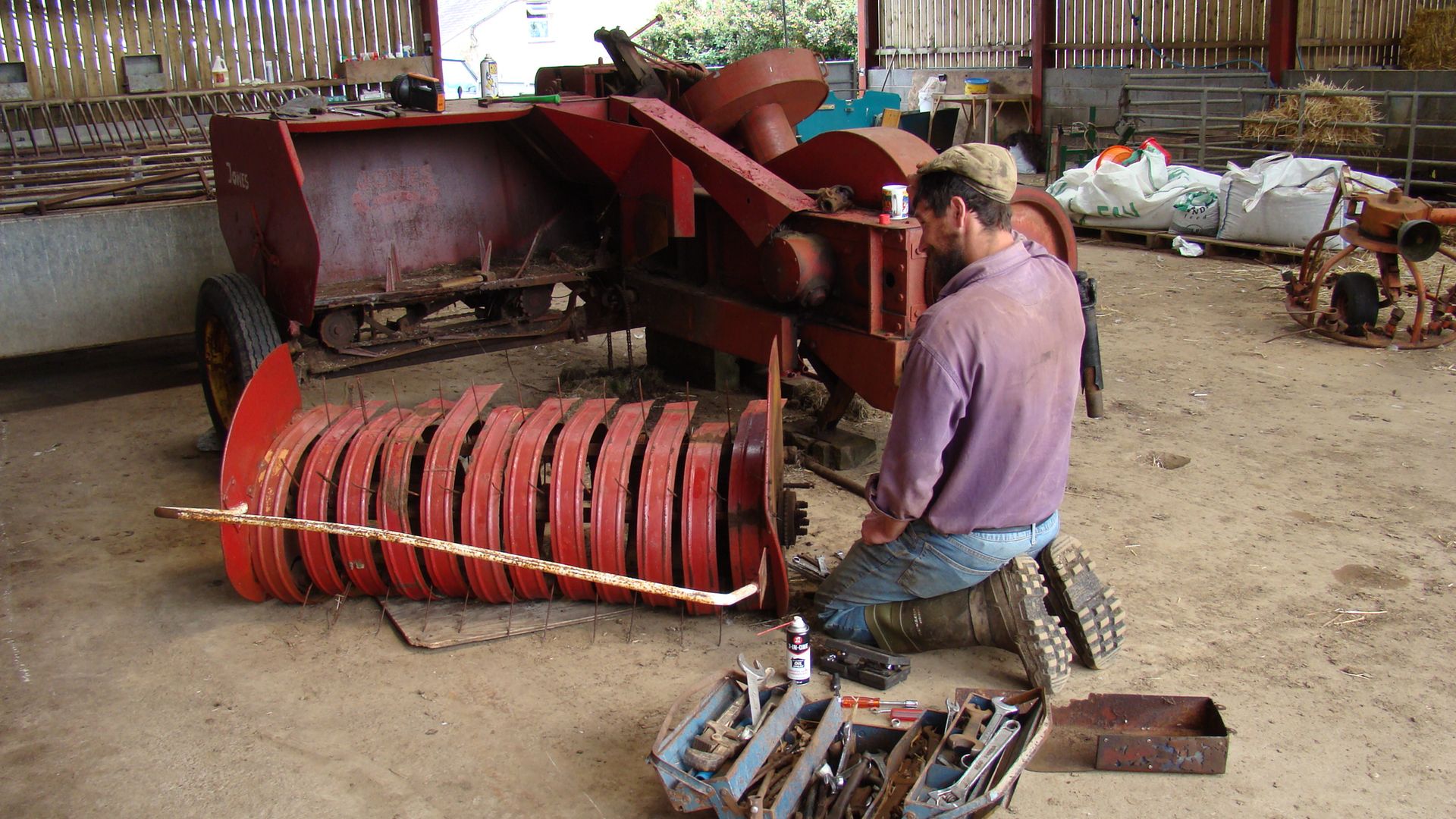 What is deferred grazing?
An alternative to housing livestock and feeding them conserved forage in the form of hay or silage is to use what’s known as deferred grazing as a source of winter fodder. Fields that are to be used for deferred grazing need to have stock excluded from them at the end of August, so the grass has an opportunity to grow well during the autumn flush. A bit of fertiliser might be required to help things along.

A considerable bulk of grass can be generated during this period which, while it will be of a fairly poor nutritional standard, should be sufficient to support non-productive animals (such as growing cattle of native breeds) during the lean months of late winter and early spring.

If you keep hill or primitive sheep breeds and lamb fairly late, then even in-lamb ewes can be kept on deferred grazing, with only minimal supplementation (such as high-energy feed blocks) being required as their nutritional requirements increase in late pregnancy. One of the beauties of deferred grazing is that the animals will disperse widely over the available area, rather than always be hanging around waiting to be fed, so poaching is considerably reduced. However, you do have to plan ahead in time to grow enough grass, otherwise the whole exercise could be a disaster.

We use deferred grazing for our single bearing Welsh Mountain ewes and it works very well. The land is rested from late summer right around until early January and the ewes are turned onto it straight after scanning. At a fairly low stocking rate, it keeps them until just before lambing (mid-March) when we start to give some concentrates and/or blocks. Most years they don’t need any supplementary hay or silage while on the deferred grazing area. Even when provided (for example, during particularly bad weather) they often don’t eat it.

TIP: One of the benefits of housing your livestock is the nice big muck heap you’ll have at the end of the winter which you’ll be able to apply to the land where it’s needed most. Properly stored, handled and spread, manure is definitely an asset rather than a liability. If you’ve bought in feed, hay and straw for your animals then the contents of the muck heap will have cost you a fair bit to produce, so use it wisely.