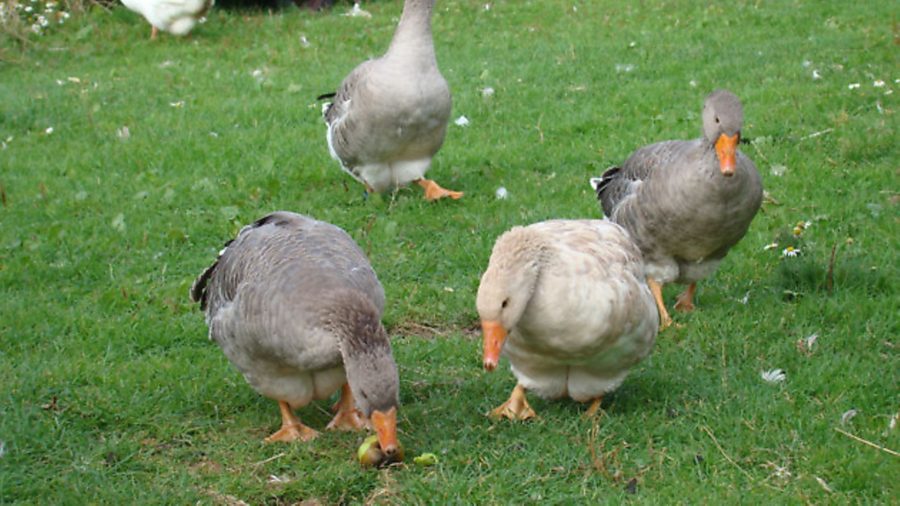 In the second part of his series on home slaughter, Tim Tyne considers the different techniques 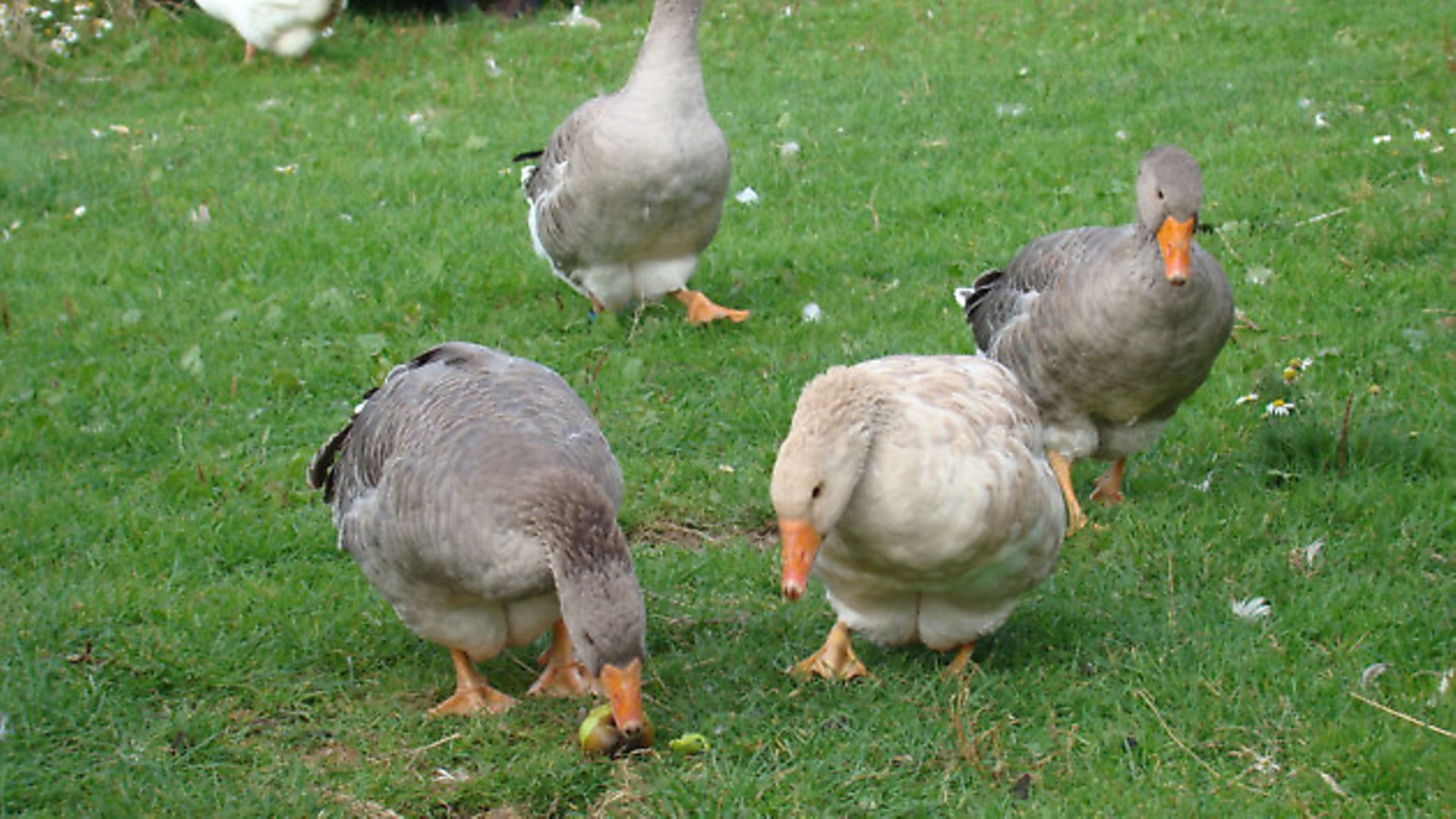 Last month, in the first part of this series, I considered both the legalities and the ethics of home-slaughter of domestic livestock. Now I’m moving on to look at the methods available for use on the different species of animals typically kept. However, even here there are both legal considerations (e.g., the use, or otherwise, of firearms etc) and moral dilemmas – there’s quite a difference between wringing the neck of an old hen for the pot and knocking a cute and cuddly goat kid on the head, and while some folk may be comfortable with the one they may blanche at the other. This is understandable, and it’s important that people operate at a level at which they personally feel comfortable. Having said that, a life is a life, and we shouldn’t rank any animals above or below others. Provided that due respect is shown at all stages in the process, and welfare considerations are uppermost in our minds, the average smallholder ought to be able to deal with home slaughter of any of the commonly farmed species of animal, limited only by physical capability.

When talking about home slaughter, I tend to divide animals into two distinct categories – those that can be killed by hand, and those that will require the use of a firearm of some sort. In essence, this is the little and the large. In the first category we have poultry, rabbits and very young goat kids (which are often killed at a few days old, as a by-product of milk production). The second category consists of adult goats, sheep and lambs, pigs and cattle. 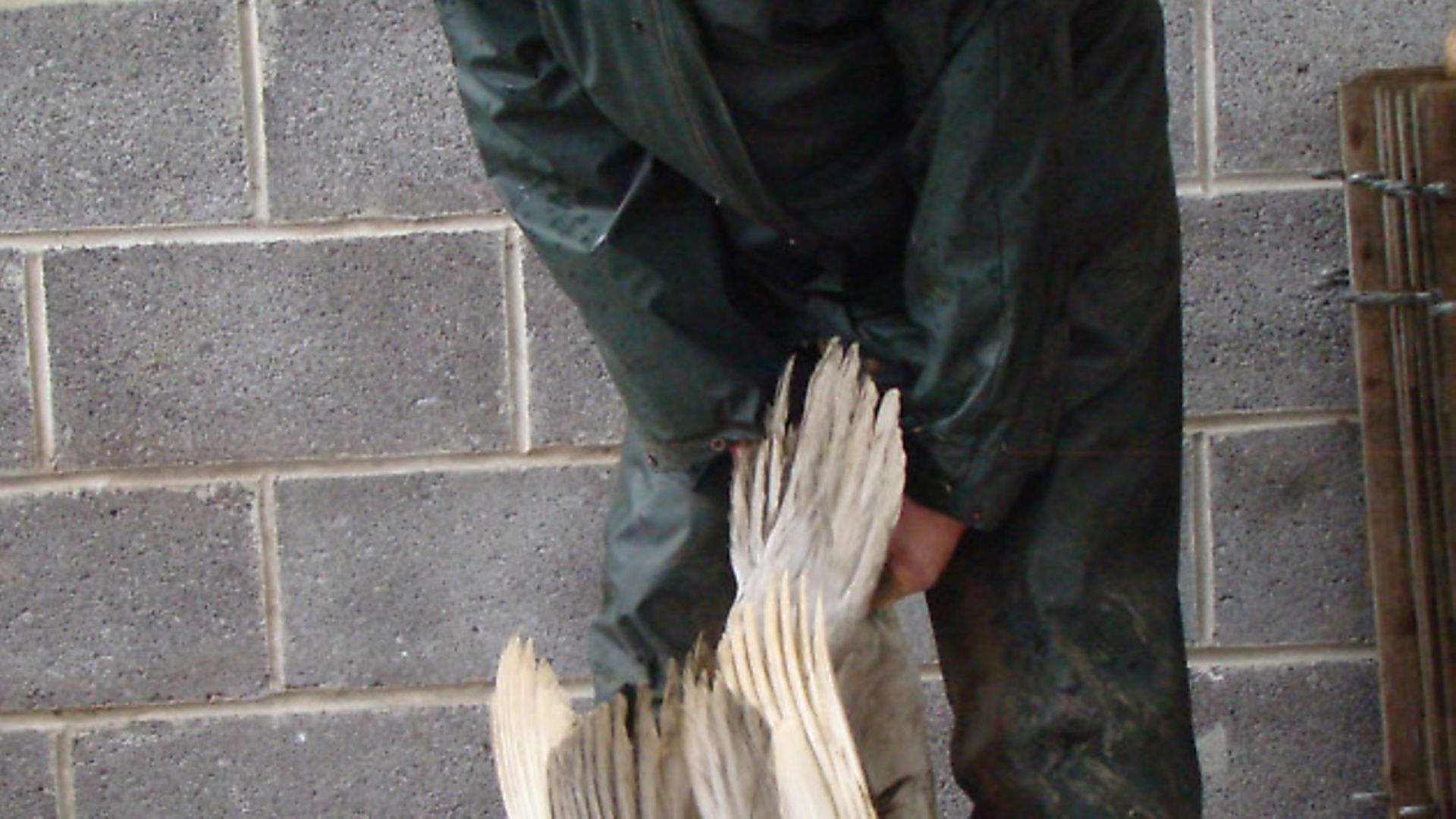 To the smallholder, one of the advantages of producing meat from small animals, such as rabbits, poultry and young goat kids, is obvious: you won’t need a firearm of any kind to slaughter them, as it can all be done by hand. Therefore, even if your location or family circumstances preclude you from owning a gun, or if your holding isn’t large enough to support other types of livestock, you can still be pretty well self-sufficient in meat. It also makes a good starting point for anyone planning to make the move into doing their own home slaughter and butchery of larger animals at a later date. 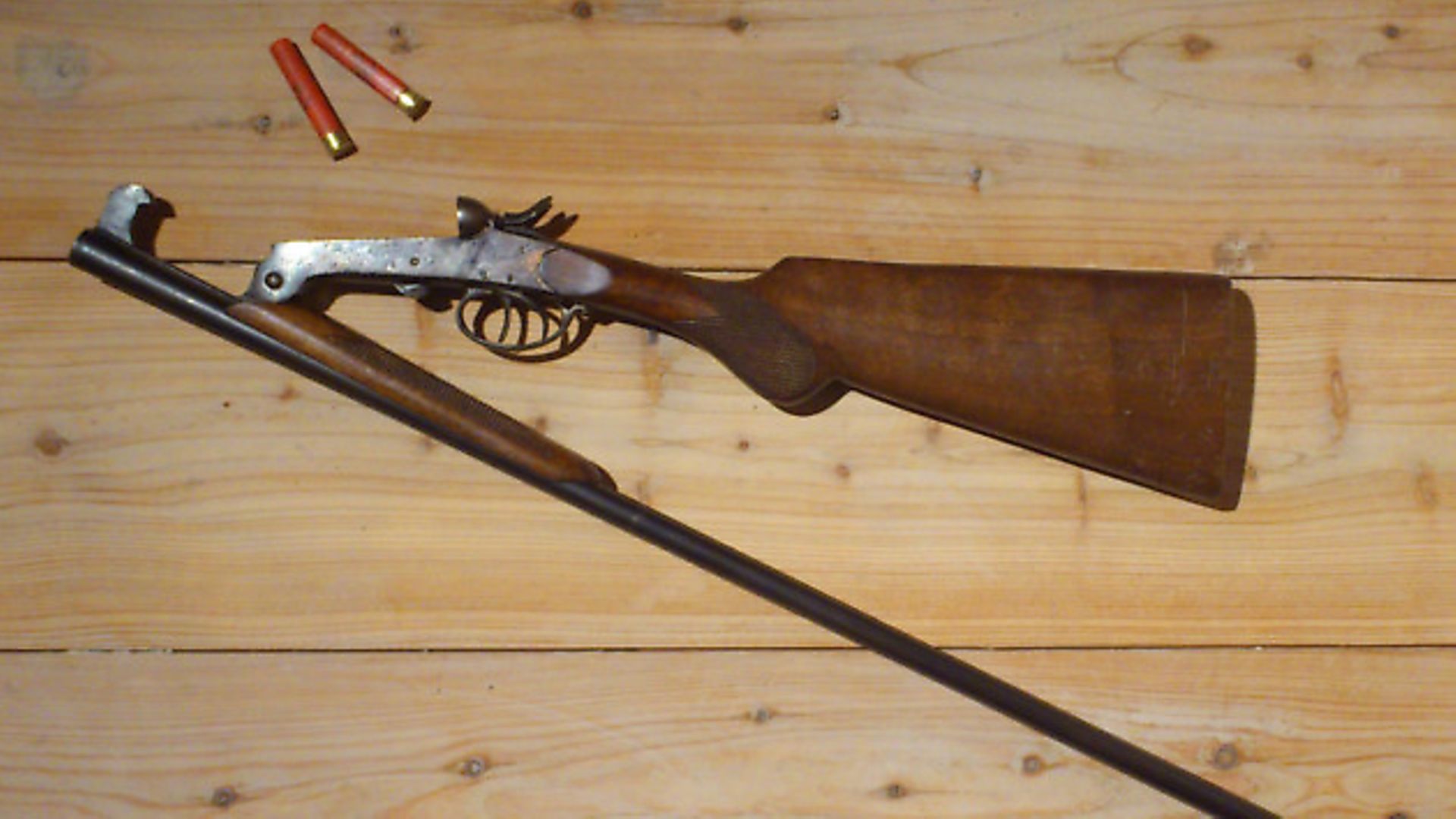 On a small scale, poultry are generally killed by neck dislocation. For chickens and ducks this involves holding the bird by the legs in one hand, taking the head in the other hand, and, when the bird is calm, you pull downwards on the head while bending it sharply back. You’ll feel it easily enough when it goes, as the neck suddenly stretches. Don’t carry on pulling beyond this point or its head will come right off, which is messy. For bigger birds such as geese, turkeys and some particularly large drakes, you’ll need to use the ‘broom handle method’, although in fact you need a piece of wood somewhat thicker than a broom handle. As before, start off holding the bird by the legs in one hand. Lower it until its head is on the ground, and then place the ‘broom handle’ across its neck, just behind the head. Stand on the bit of wood, with a foot either side of the bird’s neck, transfer your grip so you have a leg in each hand, and pull upwards. The broom handle method is classed as mechanical dislocation. Whichever method you use, the bird will begin to flap its wings uncontrollably as soon as it’s dead, which, in some cases, is sufficiently powerful to break the bone and damage the carcass. Therefore it’s a good idea to clasp the bird’s wings quite tightly to its body until the initial violent thrashings have ceased. The use of a cone dispatcher overcomes this issue.

Manual neck dislocation should only be carried out on birds weighing up to 3kg. If using this method, you’re limited to 70 birds per day. Birds up to 5kg can be killed by mechanical neck dislocation (e.g. by using the broom handle method or a suitable dispatcher), and anything over 5kg must be stunned (either electrically or by concussive blow) and bled. However, I don’t know of any smallholders who actually weigh their birds before slaughter… 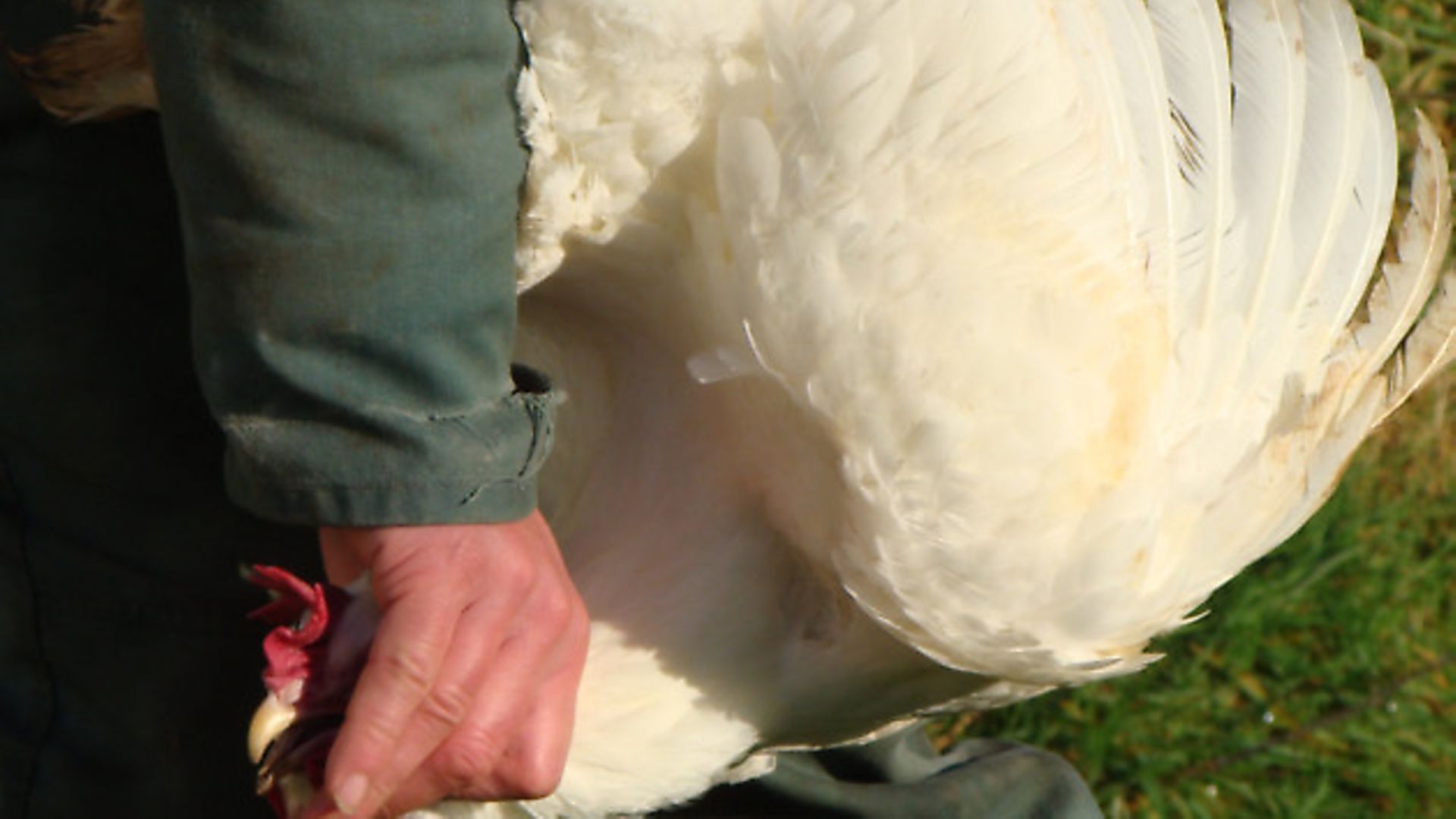 To kill a rabbit cleanly and humanely, you DO NOT hold it up by the back legs and aim a karate-like blow (known as a ‘rabbit punch’) at the back of its neck. Quite apart from the fact that this technique seldom succeeds in killing the rabbit at the first attempt, it’ll also cause horrible bruising to the meat around the shoulder area, and probably to your hand as well. The best way to kill rabbits is rather in the same manner as for poultry, so you hold the rabbit by the back legs with one hand and hold its head in the other. Then you simultaneously pull down on the head while bending it backwards, in order to dislocate the neck. If you lack the physical strength and / or size to do it this way then you can place the rabbit on a bench or table, and, when it’s sitting calmly, lift its ears with one hand and clout it behind the head with a suitable piece of wood ( a hatchet handle is ideal). Some people hold up the rabbit by the back legs and deliver a sharp tap with the hatchet handle, in a variation of the ‘rabbit punch’. However, neck dislocation should always be the preferred method.

In the unlikely event that any of your rabbits weigh over 5kg, they should be killed using a firearm or captive bolt pistol, or electrically stunned and then bled.

The following only applies to kids up to 5kg in weight. Beyond this stage they should be dealt with as for larger animals.

To kill it, the kid must be stunned, and then bled. Place the kid on the floor and make a sharp noise, whereupon he’ll stand still and lift up his head to listen. At this moment you hit him just behind the ears, on the back of his head, with a piece of wood such as an axe handle. Hard. Bleeding must be carried out immediately, by making a deep cut at the angle of the jaw. To be honest, the blow to the back of the head will, in all likelihood, kill the kid outright, but you should still bleed it anyway.

In my opinion it is much better to rear surplus goat kids until they are around 6 months old, slaughter them properly, and get much larger carcasses.

The home slaughter of large animals requires a bit more forethought and planning, as not only will you need more space to work, suitable facilities for hoisting carcasses and possibly a bigger freezer, you’ll also need an appropriate

Use of a small-bore shotgun (e.g., .410) is what’s recommended for home slaughter, as it’s the most effective method for less experienced users. It both stuns and kills in one operation, so bleeding isn’t a legal requirement. However, it’s better to carry it out anyway. You will need a licence in order to buy or borrow a shotgun.

Captive bolt pistols are no longer subject to firearms legislation, so are readily available. A captive bolt pistol is a stunning device – immediately following stunning it is necessary to sever all the major blood vessels in the neck with a sharp knife, in order to ensure that death occurs as quickly as possible.

A humane killer can be used to kill livestock outright, although bleeding should still be carried out immediately. Generally, these are only used by vets, knackermen, or other suitably qualified people.

Only to be used as a last resort, when no other method of humane destruction is available, for example in the case of casualty livestock, in order to prevent further suffering. A firearms licence would be required.

Reading through the above, it seems not only rather gory, but somewhat complex. But it does at least paint the full picture. Now I’ll summarise by extracting from it what I believe to be the most important points for the smallholder considering home slaughter of domestic livestock and poultry:

1. Manual neck dislocation is perfectly adequate for the majority of poultry and rabbits.

2. While surplus goat kids can be killed manually at a young age, it’s not my personal recommendation to do so.

3. All larger livestock can easily by slaughtered at home using a shotgun.

The remainder of this series of articles will be based on these points.