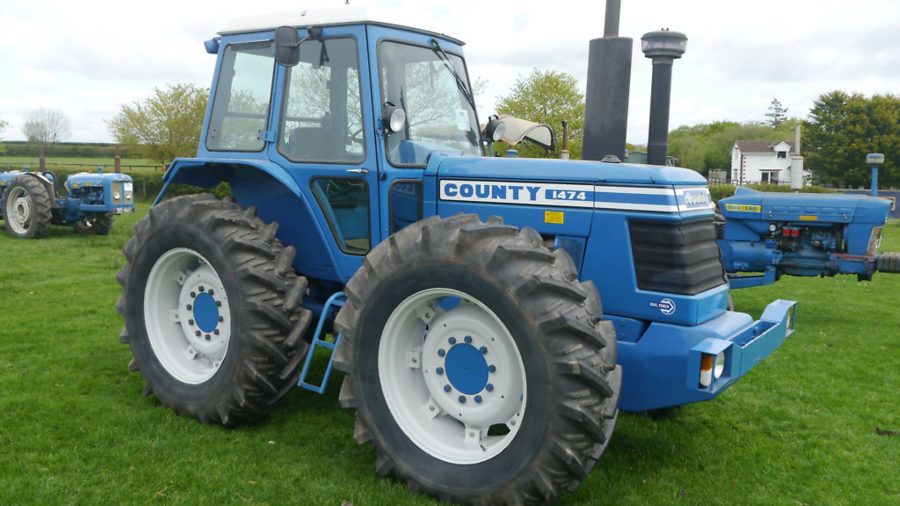 County tractors fetch eye-watering sums at auction. Kevin Alviti finds out from a former company owner why the machine with the four equal-sized wheels can make its sellers a mint

Those looking for a cheap second hand tractor to use about their holding should look away now as this tractor is not going to be it. Described as a modern classic, the County 1474 always attracts a lot of attention and a recent sale in Devon was no different, with the 1474 that made up a part of the Cowle Collection at Great Punchardon Farm selling for an eye-watering £76,650.

With four equal-sized wheels, in its day nothing could beat a County for sheer pulling power. Its tyres gave even grip all the way around and, with the engine weight well out in front, it meant that nothing could stop it. One farmer said: “It could pull down the side of a house without dipping the revs.” These wheels also gave it its distinctive appearance.

It had positive four-wheel braking, differential lock on all four wheels and 149 horse power to keep it moving. But because of the huge front wheels, the turning circle suffered, coupled with what some described as poor power steering and, being such a large tractor, those that were sold often found themselves on much larger arable farms mainly in the south of England.

There are estimates that less than 40 were built during its production, making it now extremely rare. Cheffins, the East Anglia-based auctioneer which sold the County in Devon, had one make £94,500 in May 2018, said to be the highest price ever paid for a classic tractor in the UK.

David Gittins owned County Tractors Ltd from 1983 onwards. He still farms near Ludlow in South Shropshire and had started using County tractors for contracting work during the 1970s, including for arable and silage work and muck spreading.

“There wasn’t much competition for Countys at the time,” he says. “Four equal wheels and by far the best for grip, it was one of the biggest tractors of its day and at one time the only 100hp model.”

David sold his contracting business in 1977 and went on to become a County dealer, buying and refurbishing tractors and selling them all around the world.

His company ended up becoming the biggest County dealership in the country and when County went into receivership in 1983 he purchased the business and started trading under the name County Tractors Ltd.

With reference to the 1474, he says: “They were very expensive tractors in their day. I updated the 1474 to match up to the 1884, creating the ‘long nose’ version. But there wasn’t a big call for them. We did, however, make a number of 1464s, which was exactly the same tractor but without a cab for export.

“It was an interesting era as most tractors went overseas, so I spent a lot of time in South America, Central America and all over the world. The equal wheel concept was originally designed for the sugar cane industry in Puerto Rico where they would tow sugar cane with 10 or more trailers called trains. They were also used a lot for rice, often with triple wheels in South America. In this country at that time, more County tractors were sold into the forestry and construction industries than into agriculture.”

David sold the business in 1987 to Bensons.

“Looking ahead I could see that County Tractors needed a big and constant investment to continue to compete,” he reveals. Bensons relocated the company to Powys, but unfortunately production ceased in 1990.

So, although County Tractors has gone, its products are not forgotten. Many makes of tractor attract passionate enthusiasts, but County enthusiasts seem to have an utter love affair with them. This is shown by the huge auction ticket prices and how fondly they are talked about, used and collected.