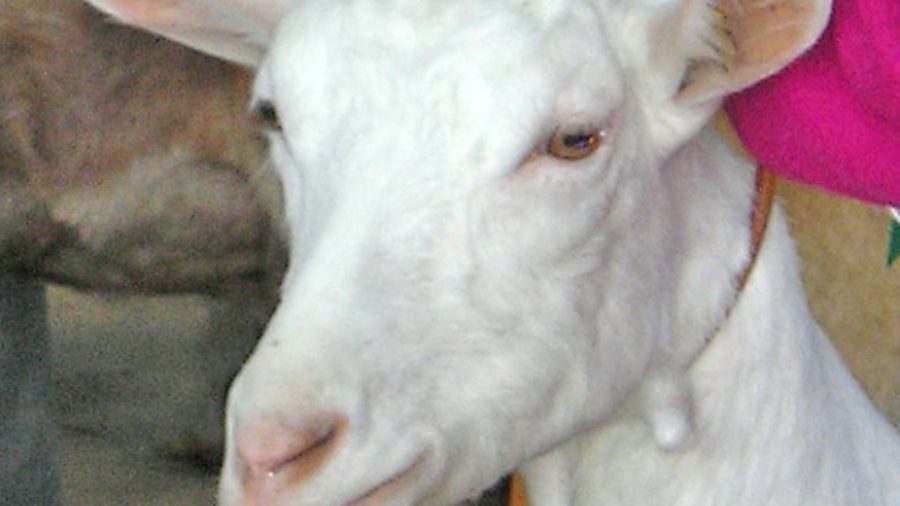 Goats at agricultural shows are always a great hit with the visiting public, the human kids are very taken with the caprine ones, many (older) people tell you stories of the goat they used to have when they were growing up. But why are so many people nowadays shying away from actually keeping them? You think you would like to give keeping goats a go, but all your well-meaning friends and relatives tell you, that… This one can be blamed entirely on the boys. The girls do not smell, ever. Neither do castrated males. Holdings with resident billy goats are however detectable from a distance, especially so come autumn and winter. There is a good evolutionary reason for this. In the wild the males do not live with the females outside the mating season and a good personalised odour will help the girls locate the boys and make their presence known to females as well as competing males.

And you really don’t need to keep a male to produce your own goatsmilk, you just need to know where your nearest one is to use his services maybe once every two years. With AI making more and more advances, even if your chosen male lives at the other end of the country (or has long since gone from this world) you can breed good quality kids without any billy contact at all. Cross-breeding between different dairy and/or meat breeds is very common. Some of the best milking goats in the UK have been bred by selective crossing.

An all-female milking herd of goats does absolutely not cause a problem with smell to the neighbours or sensitive members of the household.

So when you visit some agricultural shows this summer have a good sniff when entering the goat tent. Unless there are males exhibited, you will notice no smell at all…. (Other than the one of the nice hay all the girls get spoiled with when at shows).

Again a great injustice to a hardworking dairy goat! There is a world of difference between mass-produced milk (of any kind) – which has been pasteurised and homogenised to make sure a completely uniform and safe product is presented to the customer – and home-produced milk from a small herd of dairy animals that are cared for as individuals, not routinely treated with antibiotics and which is neither pasteurised nor homogenised. Goatsmilk produced that way tastes creamy and is very mild. An unappetising “goaty” taste – which can happen from time to time in any herd – is usually due to a mineral imbalance in an individual goat’s digestive system. The majority of such cases is swiftly resolved by giving a mineral drench containing Copper and Cobalt. I have not ever encountered this in my herd. Sometimes the smell of the male may be apparent in the milk if he is kept together in a pen with females – again this is not recommended for this very reason. Of course milk produced on the smallholding will have to be treated with respect – filtered and cooled straight away after milking and used up within a day or two. I would urge anyone to try and test some home-produced goatsmilk, even better to try it blindfolded with other samples present too.

For the modern household with a once-per-week supermarket visit buying all their essentials – that then also have to keep fresh until the next week – farm-fresh raw milk is very difficult (but not impossible) to include in their diet. (see previous article about raw goatsmilk in CS Dec 2013). As goats can also be kept in a non-grazing situation – many successful goatbreeders in the UK rear their goats in a garden, there is really no excuse not look into the possibility of keeping goats on your smallholding.

Why is goatsmilk (and cheese) completely white?

Goats’ digestion turns Carotenes (present in green fodder, especially grass) into Vitamin A, whereas this is not the case for cows. Hence goatsmilk is higher in Vitamin A content, whereas the Carotenes present in cowsmilk will have to be converted into Vitamin A by the human body. And they do give the yellowish colour to cowsmilk, in particular the cream and cheese. Looking at cowsmilk in the supermarket recently. I thought it looked quite white too – is that because the majority of milking herds are now housed all year round with not much in the way of green fodder?

For any goatkeeper who has at times struggled to get an unwell goat to eat – anything from toast with honey to willow branches – this is the most infuriating comment the general public can make. It is often a throw-away remark, but goats are very specific about the food and the quality of hay they eat – if they don’t like it they will just refuse it and empty their hay rack onto the floor to use as bedding! Also goats are browsers rather than grazers, and therefore use their mouths to explore tastes and textures. They are generally much more inquisitive than sheep and goats that have been reared in a small group with regular human contact will be very friendly with their owners (and their coat pockets). Goats – like sheep and cattle do not have any upper teeth at the front of their mouths, just a hard bony pad which they use as a grindstone when chewing their cud. The pad also has taste sensors on it, allowing the goat to nibble an unfamiliar object and test it before committing herself to all of it.

Goats are also not really suitable as lawnmowers, wether lambs are much more suited to that.

Those horns are dangerous!

Yes they can be. However most goatkeepers who have made the conscious choice for horned goats approach these horns with the respect they deserve. It certainly requires different handling, but also gives an emergency handle to hold onto… For anyone planning on keeping goats with small(ish) and enthusiastic child-helpers around the holding disbudding is however strongly recommended. Disbudded goats are also more compatible with normal hay racks, water buckets and hurdle arrangements in their sheds. Disbudding is an additional cost as it has to be undertaken by a veterinary practitioner preferably in the first week of the kid’s life. Adult goats cannot be de-horned as it is a highly dangerous operation for the goat. The majority of registered goats are disbudded.

Both sexes in the caprine world are growing beards, with the males having the more spectacular examples. However the majority of goats seen by the general public are at goat shows, and here to show them in a more feminine way – the girls’ beards are trimmed right back. If you go and visit herds at home you will find that they normally keep their beards.

I hope I have dispelled some of the more common goat myths and at the very least encouraged you to research goats and what they can do on your smallholding in more detail. Of course committing yourself to milking and feeding twice a day, regular cleaning out of pens and consistent hoof and general care is a significant commitment, but there are many ways of management that work for different situations. They are one the most rewarding kind of livestock to keep for the smallholding family!