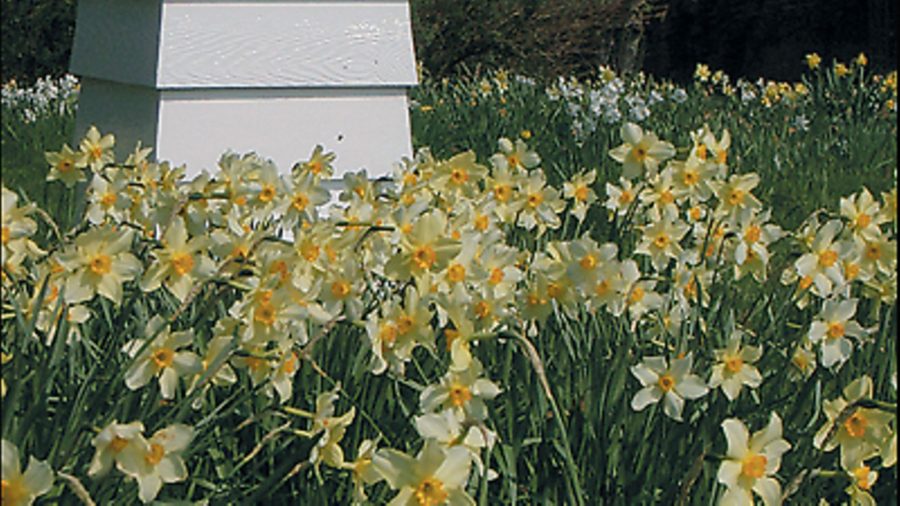 Autumn was left waiting last year until winter finally decided to creep in late and without so much as an apology. The long mild autumn allowed queens to lay longer and foragers to forage longer. Swarm prevention plans should begin early this year as colonies quickly become overcrowded. Because of the abundant late forage, many beekeepers didn’t feed going into the winter. My colonies overwintered on ivy honey, and others left theirs on heather honey. It’s still prudent to heft the hive and check that the bees have sufficient stores to feed their expanding brood. To gauge the weight of stores, compare the weight of your hive with an empty one. If it’s not much heavier, feed a gallon of thick syrup or a large slab of fondant directly over the brood chamber. When weather allows, open up the hive and check that the bees can make use of the stores they have. Ivy and heatherVarious contrary opinions exist about bees overwintered on ivy and heather honey. Some beekeepers advocate autumn feeding even when ivy or heather stores are present. Others have overwintered colonies successfully on both crops. How do we know if we’ve acted in the bees’ best interests? With a little background knowledge, they will soon tell us.Morse and Hooper’s Encyclopaedia of Beekeeping describes the crystallization of winter stores, and how it can lead to dysentery and starvation if there’s not a water supply. Ivy honey has a low moisture content and is quick to crystallize, which can make it difficult for the bees to use. Bees overwintered on ivy honey need a water supply nearby (although not directly in front of the hive as they will defecate in it and spread disease), and you may need to offer thick syrup now to supplement hard-set stores.Heather honey doesn’t crystallize, but it does pose a different problem. Dark honeys and brown sugars cause bees to produce more waste than light honeys and white sugars. This, in turn, leads to them needing more cleansing flights during the winter. With our milder winters (mine flew right through December) this isn’t a problem for many bees.In-seasonOctober to March is traditionally considered the beekeeping off-season, and hives aren’t opened until April. Remove mouse guards and reduce the entrance against robbing and cold winds. On a warm March day, a very quick inspection will check for eggs and sufficient stores, and will help plan your actions this month. Hive parts will be well stuck together and need plenty of gentle easing with your hive tool. Food usage increases greatly at the end of March as workers feed the rapidly expanding brood nest. Early forage includes the willows and hazels (both good for early pollen and hence brood rearing) and in many gardens, we start to see dandelions, daffodils, tulips, forsythia, hellebores, polyanthus and magnolia. Plan ahead to summer and start planting hollyhocks, autumn bulbs and hardy annuals for the bees.Spring cleaningIn April, there’s time to afford a longer inspection and a change over to clean hive parts. Brood frames that have dark wax can be replaced with fresh foundation. When planning a visit to the bees, ask yourself why you’re opening up the hive. They have been left undisturbed for many months, so stop, think and plan, and be flexible as plans can change when you reach the hive and observe it from the outside.  For those who move their bees to crops throughout the year, plan where to take the hives for oil seed rape and field beans in due course. Your bees will need a strong foraging force, so consider a fast feed of thick syrup over the brood nest to encourage the queen to lay more eggs to be your foragers in six weeks’ time.Like a hormonal adolescent, winter is creeping in later and, as I write this, it’s not clear whether it plans to get up early, or whether it is set for a lie in. In 1858 Anthony Trollope wrote: Let no man himself boast that he has gone through the perils of winter till at least the 7th May. Nearly 150 years later, May 7 seems late, and March and April are the difficult months for our bees. They haven’t got through the perils of winter until they’re building up brood and foraging for themselves. In some parts of the country, spring is practically upon us, whilst others snuggle up a little longer before the warm weather arrives. Read Mother Nature’s signs, and above all, ensure your bees have space and food for their expanding brood nest.  ContactsNational Bee Unit (NBU) 01904 462510. Email: nbu@csl.gov.ukwww.csl.gov.uk/science/organ/environ/beeBritish BeeKeepers’ Association (BBKA)Stoneleigh Park Exhibition and Conference Centre, Near Coventry, Warwickshire, CV8 2LZ.www.bbka.org.uk/convention.php