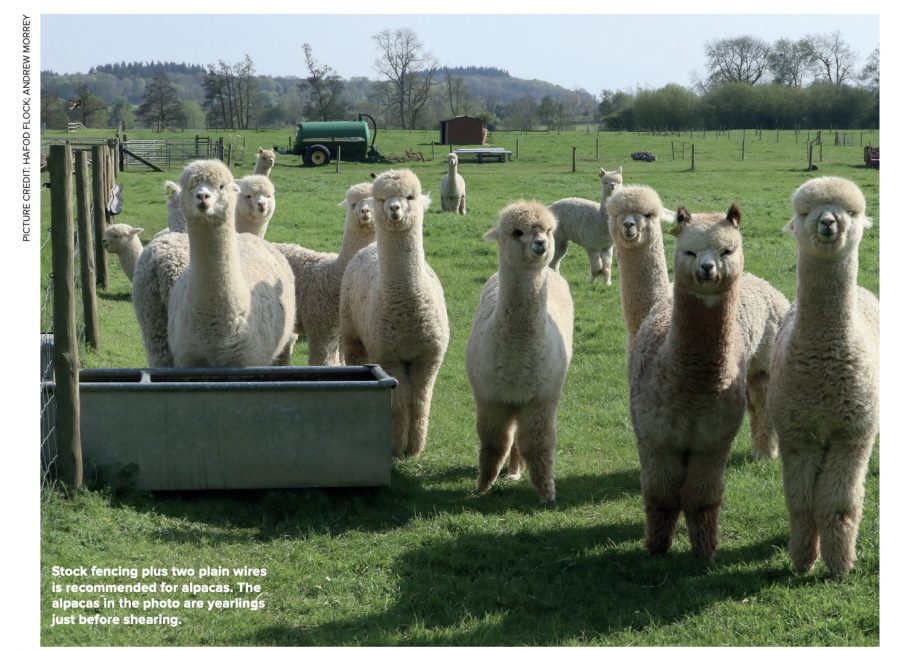 Alpacas are beautiful and unusual animals to keep. They are clean and intelligent and they are outstanding fibre producers, pets and companions. Alpacas are easy to raise, can be handled by anyone and are safe around children. They are quiet, peaceful animals, and make soft humming sounds to communicate. Alpacas get along well with goats, sheep, donkeys, horses, cats and family dogs. They make excellent stock protectors against foxes for lambs and poultry. Alpacas are easily transported in a van or trailer, and usually sit down in transit.

PASTURE
Alpacas are extremely hardy and adaptable to most climates, altitudes and conditions. The minimum grazing area in the UK for two or three alpacas would be half an acre.

A normal stocking rate on good pasture is four to six per acre. Alpacas make cleaning the paddock easy, as they ‘go’ in only a few spots. Pick up the droppings to aid parasite control. They are practically odourless, are low in nitrogen and make excellent manure for the garden! 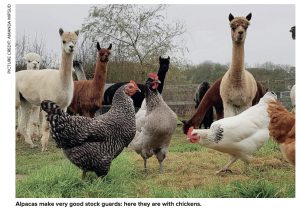 FENCING AND SHELTER
A four foot high fence makes an adequate enclosure for alpacas. This should ideally be three foot stock fencing with two plain wires above. Avoid barbed wire if at all possible. Barbed wire could, if necessary, be used, but only as a top wire above plain stock fencing. It would not be advisable any lower down as alpacas tend to rub along fences. Shelter is necessary, but they will often prefer good hedges or tree shelter to a field shelter. This seems to be because they prefer light and fresh air to a dark enclosed space. But field shelters can be adapted to become more enticing for them.

NUTRITION AND HEALTH
Alpacas eat mainly grass in summer, and hay or haylage in winter plus supplements, depending on the conditions. Pregnant females require higher nutrition than stud males or geldings for example, and youngsters need to have a raised level of nutrition to ensure that they grow on well after weaning at about six months old. It is advisable to offer a daily supplement of specially formulated vitamin and mineral mix, such as Camelibra to all alpacas. Adult alpacas weigh an average of 60-80 kilos and they can live for 15-25 years. Alpacas also require vaccination against clostridial diseases such as tetanus and types of enterotoxemias.

TOE NAILS
Alpacas and llamas are known as camelids, as they belong to the camel family and as such, they have two toes on each foot, with soft padded feet which do not damage vegetation. However, their toe nails require checking and trimming regularly so that their feet lay comfortably flat on the ground. This is normally done with a pair of sheep foot trimming shears. It is a matter of carefully trimming around the soft pad, as you would for your own finger nails.

ORIGINS
Alpacas and llamas are indigenous to the high Andes of the South American countries of Peru, Bolivia and Chile. Around six thousand years ago alpacas were domesticated from wild vicuñas, and llamas were domesticated from wild guanacos. Vicuñas are a rich honey colour, and have some of the finest, warmest fleeces known to man. One of the results of domestication of vicuñas was the emergence of a huge range of natural colours, including white, black, brown. grey, and any combination of these colours. Alpacas are not quite as fine as vicuñas but, whereas vicuñas produce very little fleece and can only be sheared alternate years due to the slow growth of their fleeces, alpacas need to be shorn annually and produce many times more fleece. 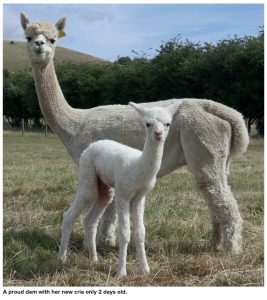 BREEDING
Alpacas are usually bred at 18-24 months of age. They mate sitting down, and their gestation period is normally 11 to 11.5 months. Only one cria is born usually, and very often the dam will wait until a fine day to give birth. Births mainly occur in the mornings. A new-born cria may weigh anything from five to eleven kilos. In 33 years of breeding, we have only had one pair of twins born at Bozedown Alpacas. The British Alpacas Society (BAS) maintains a breed directory, and most alpacas in the UK are registered. Progeny from registered parents are eligible for the breed directory. BAS currently has 1,500 members representing 45,000 alpacas spread all over the UK. There are regional groups from west Wales to East Anglia ad from Lands End to John O’Groats. See www.bas-uk.com

DO THEY SPIT???
Alpacas very rarely spit at people, but they may argue, for example over food, and spitting at each other is their way of arguing. Also, a pregnant female will ‘spit off’ any approaching stud male; this is usually our first clue that a recent mating has been successful.

IMPRINTING
Sadly, when llama and alpaca crias get too much human attention, as in petting corners at zoos for example, they can become imprinted so that they identify with humans as their own species. Their understanding of their herd now includes humans. Their natural instinct on reaching maturity is to sort out a pecking order by seeing which herd members they can dominate. This means they get aggressive towards humans. To avoid this we never cuddle our young crias. After weaning this is no longer a problem and they can easily be halter trained.