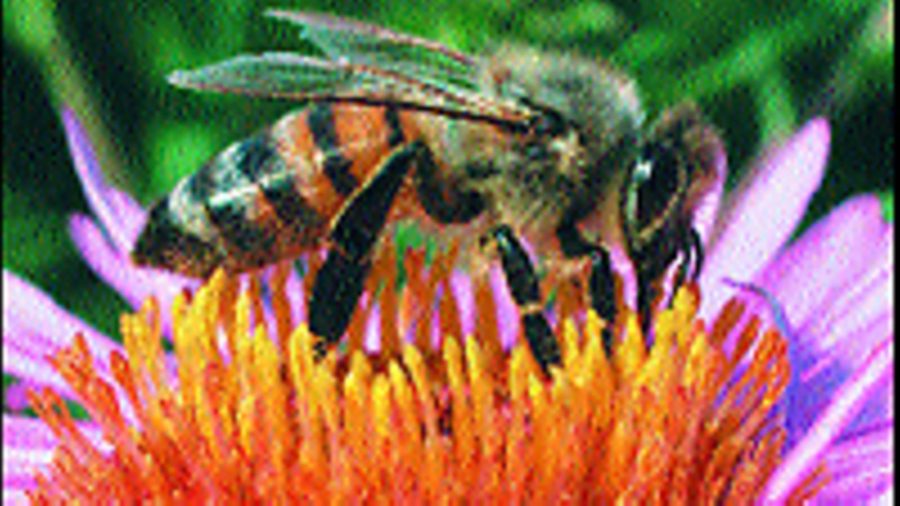 The future of Britain’s honeybee population is in doubt, with one in three hives lost. Here our bee writer ANNA CHAMBERS studies a similar worrying collapse in the United States, and the efforts to identify the cause

Bees and plants have a symbiotic relationship; the bees collect pollen and nectar as food, while the plants benefit from the act of pollination. This relationship has formed over millennia and is of vast importance to the planet. It is only in recent history that man has entered the cycle. We feed on the crops produced by the plants, and on the crop produced by the bees – but what do we offer in return? One third of the foods we eat are reliant on pollination by the honey bee, an industry that is valued at $60 billion worldwide, and $15 billion in America alone.We care for the bees and plant crops, we perpetuate the relationship, we consume the produce, yet the methods developed over the last century have resulted in fields of monocrops and meant that hives are transported miles to pollinate them. This is particularly true in America where the first crop of the year is the almond. America produces 80% of the world’s almonds and, from  February 14 for three weeks, the fields in California’s Central Valley are awash with pale pink. For as far as the eye can see, the almonds are in bloom and 1.2 million bee hives are transported from all across the country to pollinate them, co-ordinated by bee brokers.

Hakenberg’s ‘Hoax’In November 2006 commercial beekeeper Dave Hakenberg discovered empty hives. Bees were either absent or in such small numbers around a queen that the colony could not survive. Inside the hives were plenty of honey and pollen stores. What could be the cause of this mass exodus, and where did the bees go? Hakenberg’s hives were notching up 5,500 miles a year on the road before he lost two thirds of them; but this is not the first time that colonies have mysteriously disappeared. Back in 1869 unexpected losses were first recorded, and since then we have had losses across the world, including an epidemic between 1905 and 1919 in which 90% of colonies were wiped out on the Isle of Wight. Hive mismanagement has been blamed, and beekeepers in the east of America referred to Hakenberg’s losses as ‘Hakenberg’s Hoax’ or ‘Piss Poor Beekeeping’. However Hakenberg’s experience spans four decades of beekeeping, which to my mind means that his hive management techniques are not in question.When beekeepers in eastern America began to experience losses of similar magnitude, the beekeeping industry, the growers and the government began to take notice. Bee brokers struggled to find enough hives to pollinate the crops and the price paid per hive rocketed from $40 to $150. In 1922 America had imposed a very strict bee import ban after Isle of Wight disease, but with recent colony losses of such magnitude this was lifted in order to bring hives in from Australia. These bees, although also descended from European honeybees, had been free from varroa, a blood-sucking bee mite that has become commonplace in Europe and America, and they soon succumbed to the devastating effects of this little mite.

Colony Collapse DisorderIt was not just the beekeepers’ livelihoods that were under threat; the government and the growers faced huge financial losses, and this spurred them on to uncover the causes of this disturbing event. Opinions were divided as to the cause of the sudden collapse of America’s bee colonies and the term Colony Collapse Disorder (CCD) was coined. It is said that if you put four beekeepers in a room and ask their view you will come away with five opinions, and this was certainly the case here. Here are possible causes:

IllnessSome beekeepers thought illnesses were the culprit – honeybees, as with all other animals, are prone to their own array of pests and diseases. The varroa destructor mite sucks the blood of the bee, weakening her and spreading viruses throughout the colony. Nosema apis is a parasite that lives in the gut causing dysentery and weakening the bee. The tracheal mite Acaris woodi causes premature death. The small hive beetle’s larvae feed on the bees’ stores of pollen and honey, and the wax moth larvae destroy the wax comb. Young brood are affected by bacterial foulbrood and the fungus chalkbrood, and both are spread by the bees’ meticulous hive cleaning. The bees have lived with these in the past, but could it be that our modern hive management techniques are weakening their resistance to attack?

PesticidesOther beekeepers leant towards pesticide damage. A relatively new type of insecticide, neonicotinoids, is used on the soil and as a coating before the seeds are planted; the insecticide reaches all parts of the plant, including the pollen. These systemic neuro-active insecticides are more selectively toxic to insects than mammals. The most commonly known member of this group is Imacloprid, and it has a long residual activity. Since the 1990s neonicotinoids have been strictly limited in France because of the perceived damage to honeybees and other pollinating insects, and in May of this year Germany banned seed treatment related neonicotinoids due to negative effects upon bee colonies. However, the manufacturers, Bayer, insist that, when used correctly, the doses are well below sub lethal levels. What isn’t clear is their cumulative effect on stored pollen, or their interaction with other chemicals.

StressAmerican beekeepers truck their hives across thousands of miles, taking days to reach their destination. This is nothing new as beekeepers have been taking their hives from almonds to apples, to blueberries, to cranberries, and to other crops for decades; however, in recent years, the highways they travel along have become criss-crossed with WiFi, mobile phone masts and other signals. Are the bees becoming weakened by the constant travelling, and could the harmful effects of microwave signals reduce their immunity to attack?

Barren LandMother Nature creates diversity, but man creates division. The almond groves are beautiful when in bloom, but they are barren deserts beneath the trees. The make up of nectar and pollen is unique to every individual plant and different combinations of natural sugars make different nectars and, ultimately, different honeys. The honeybees forage on what they can find and are forced onto a mono-diet which they then feed to their young. The long term effect of this poor diet is unknown, but could weaken the bees’ immune systems.

ConclusionsWith so many factors to consider, as well as the interaction of all of them, there is currently no evidence pinpointing one particular cause of CCD. New research, sponsored by the almond growers, is looking at making the dwindling population work harder by using an artificial pheromone in the hive that tricks the bees into thinking that there is more brood, or young bees, to feed than there actually is. Whilst this may work in the almond growers’ favour to begin with, the effects on the colony later in the same year, and in subsequent years, is not known.Overall opinions are divided, and research has yet to provide an answer as to why the bees are becoming susceptible now, and where they all go when they abandon the hive – imagine a bee graveyard somewhere full of dead and dying insects. What is known, however, is that numbers are dwindling fast and billions of dollars are at stake, balanced on the presence of this tiny little insect.

Moving ForwardIf CCD continues at this rate, the commercial beekeepers in America will not be in business after 2035; managed colonies will disappear and what few feral colonies remain will die out from disease and pest attack. It is the case already that in some parts of China crops are hand pollinated, which is neither as efficient, as quick or as cost-effective as pollination by the bees. Big economic problems will prevail due to continued globalisation of industries and the greed of the companies and governments that run them. There is a lot of investment in agriculture, monoculture and patents, and it is not an easy task to persuade people to change their ways. Bees have developed and evolved over millennia, but in recent history we have changed so many things that they, as well as us and most things in nature, are struggling to keep up.There is more at stake than the pollination of billions of dollars worth of almonds. Twelve per cent of the Earth’s land is cultivated for growing crops. Without bees we would lose fields of sunflowers and oil seed rape, fruit-filled orchards, clover-rich pastures and the animals that graze them. There would be no honey on our shelves, no fruit (except for bananas and pineapples), and many vegetables, pulses, meat and dairy products would simply vanish. We would rely on wind pollinated cereal crops for bread and pasta, but cheese and creams would disappear. Even soya milk would peter out as the soya bean relies on bee pollination. Cotton would be replaced with man-made fibres, herbal remedies with synthetic cures, and many of our drugs, cosmetics and polishes that rely on beeswax in their formulation would fade away.Honeybees have been industrialised and are being treated like machines, but they are not the only pollinators of crops, and scientists are looking at harnessing the many different varieties of bumble bees and wild solitary bees. They are also looking at breeding a ‘super honeybee’ that will work harder. But, as for CCD, we are no nearer finding the culprit and more funding is needed to research the myriad of possibilities that scientists believe could be the cause.The bees are our canary in the coal mine, our indicators of environmental health. Globalisation leads us down a gold-lined path with promises of rich, fulfilled lives. The gold walls are so bright that they blind us to the fact that this sterile environment is no longer supporting wildlife. It is time we stepped off this path on to the green-lined one that is awash with a diversity of plant life and animals working in harmony. Surely small scale organic farming, diversity, locally produced goods and changing the way we manage our bee colonies are the right ways forward? These methods work with nature at a pace that we can all keep up with – but can we persuade the rich corporations to join us? Their livelihoods are at stake, but so are ours. And so is that of the bees.Anna Chambers’ article is based on research by Alison Benjamin and Brian McCallum, authors of the recently published book A World Without Bees. Anna attended a recent meeting, organised by Stephen Roberts of Courtyard Book in Glastonbury, at which the authors discussed the issues involved. The book was published this year by Guardian Books, priced £9.99.