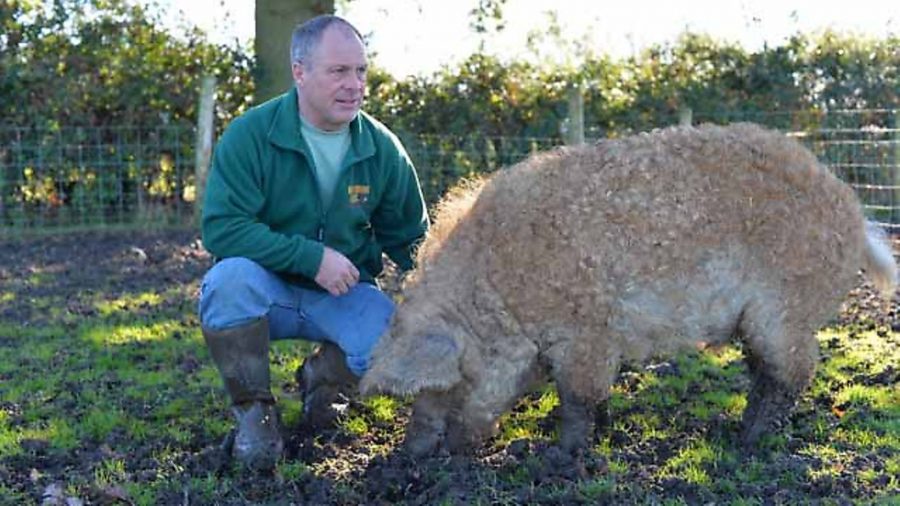 Dec 11, 2013: Liz Shankland meets a pig keeper who has a variety of interesting breeds – as well as a whole host of other intriguing animals

Nick Dean has always had a taste for the exotic, so when he bought a 14-acre smallholding near Oundle on the Northamptonshire/Cambridgeshire border, he knew exactly what he was going to do with it. As well as stocking it with chickens, ducks, and geese, he went out and bought some much bigger, more impressive birds – rheas, emus, and ostriches. Oh, and he also happened to invest in a herd of reindeer and some alpacas, too.

Not surprisingly, when he went shopping for pigs, he was tempted by the the strangest-looking breed available – the woolly-coated Mangalitza.

“I love them because they are so unusual,” said Nick, who runs Woodbine Rare Breeds with his partner, Stephanie.

“We had set up the pig field ready for pigs, and then someone who wanted to buy some emus came along, so we ended up doing a swap – two emu and six eggs in exchange for six pigs, and a bag of Mangalitza meat, and a tortoise!”

Nick fell for the breed in a big way and now has a pedigree herd which consists of all three colours – red, blonde, and swallow-bellied. Popular in Austria, Germany, Hungary, Romania and Switzerland, the Mangalitza is a breed which suffered a severe decline, with numbers dropping to just 150 sows in 1993. Fortunately, small numbers of breeders across the world worked hard to restore the population, and 17 were imported into the UK from 2006. The British Pig Association agreed to manage the herd book for the breed so that a pedigree register could be set up and their popularity began to grow.

As well as their quirky appearance and hardy nature, Mangalitzas are highly-prized because their meat is perfect for charcuterie. Known by many as the ‘lard pig’, the Mangalitza produces meat which has a high degree of intramuscular fat, giving the ‘marbling’ that top chefs rave about. The meat is ideal for curing over a long period of time because it does not deteriorate during storage.

Health-conscious fans of low-fat diets may be put off by the appearance of Mangalitza pork, but it’s worth bearing in mind that, because these pigs are slow-growing, taking as long as 12 months to two years to reach their full potential, the fat produced is largely monounsaturated and high in Omega 3, 6, and 9 fatty acids.

“People have this perception that the Mangalitza is not a meat pig,” said Nick. “It’s true that they are a specialist meat pig, but it would be nice to see it recognised as a good pig to produce quality pork as well as charcuterie.

“We’ve had pigs for about four years now, but, up to now, we’ve never sent any of our own Mangalitzas off for slaughter, because most of our weaners are sold to other people. We have pig-keeping courses here, so a lot of the stock is bought by people who attend the courses.”

In order to provide variety for the course attendees, Woodbine Farm also has Oxford Sandy & Blacks, British Saddlebacks, and Large Blacks. Although Nick knew nothing about pigs when he started Woodbine Farm, he did his homework and learned as much as he could in preparation, and has since played midwife at dozens of farrowings.

“If I know one of the sows is due to farrow, I’ll stay up until the early hours if I have to. Normally, they give birth without any problems, but my favourite Large Black sow, Beth, is getting on a bit now – she must be five or six years old – and she’s started to have a few problems getting the piglets out. The last time, I spent quite some time with my arm up her back end. I could feel a piglet was stuck – I could just feel its mouth and its teeth – and I managed to pull it out. When I was convinced there weren’t any more inside her, I went off to bed, only to find another one in the pen the next morning!

“In an ideal world, I would say it was time to ship her off to the abattoir, but I’m not sure if I can. I struggle to put animals down, so she might have to live out her days here.”PICTURED: Nick Dean with one of his Mangalitzas