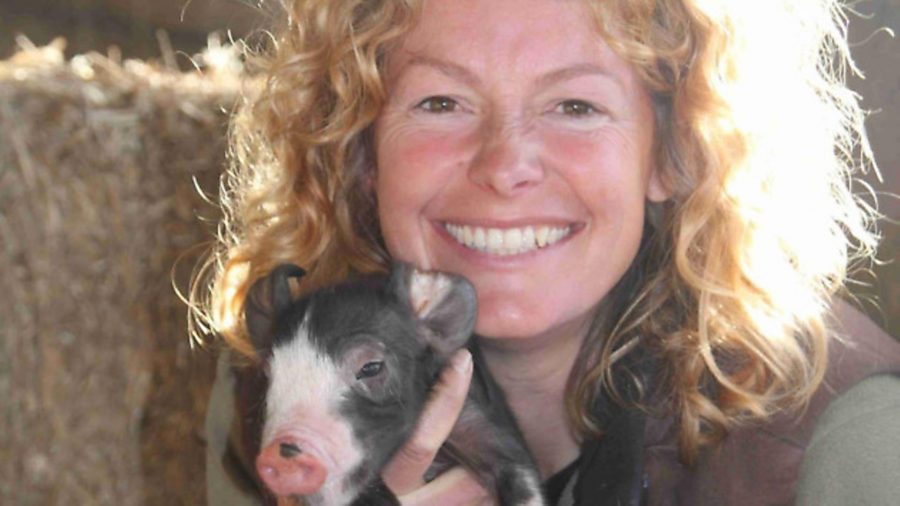 Myfanwy the Berkshire sow was undoubtedly pregnant. She had become vast, and as her due date approached she spent more time lying stretched out in the straw of her pen, her stomach and teats swelling visibly by the day. One morning tiny, glistening droplets of milk clung to the end of some of her teats.

“She’s getting close,” said Bob Stevenson, our pig expert. “It could still be a few days, but it won’t be long now. As soon as she starts building a nest, you know the birth is imminent.” “Pigs build nests?!” I exclaimed incredulously. “Oh yes,” replied Bob, “you just wait.”

Three days later we stood, entranced, watching Myf methodically carrying mouthfuls of straw from around her pen until she had built a huge pile in one corner. Still she didn’t rest. She would lie down then heave herself up again, re-arrange the straw, fussing and fiddling until she thought she was satisfied, only to start all over again moments later. She rejected her food – unheard of, but, according to Bob, absolutely normal at this stage of labour. “It’s the classic pattern. She’ll be restless and fidgety for a few hours, but it is when she goes very still and quiet that you know she is about to give birth.”

We didn’t dare leave her side. She hadn’t had a litter for over two years, so we wanted to keep a close eye on her, but both Ludo and I also had to admit that having never witnessed a pig farrowing before, we didn’t want to miss a thing. We camped outside her pen in our camper van over night. I didn’t sleep at all, but lay, ears alert to every snuffle and grunt, ready to leap up at any moment. At five o’clock I gave up pretending to sleep and went and sat on one of the straw bales lining her pen. Farmer Tim was there too. He’d taken Bob’s advice and rigged up a makeshift farrowing pen. Piglets are often killed by their mothers inadvertently lying on them. To avoid this Tim had wedged a feeder in one corner, with bars spaced wide enough for the piglets to get through. Above the protective space he’d hung a heat lamp. Bob, who arrived to check on the expectant mum later that morning, nodded his approval. “That’ll do the job. The piglets will be drawn to the warmth of the lamp and it gives them a safe, warm place to be when they are not feeding. “Now then, Myf,” he said, kneeling at the snoozing sow’s head, “how are you getting on?” “She hasn’t really moved all morning,” I said. “But watch her back leg!” Bob pointed out that she had lifted her back leg and was stretching it backwards, as if to ease a stiff joint. “Watch closely,” he said, “her tail’s twitching. And there it is!” And sure enough, with no fanfare at all, a tiny, velvety black form eased out from under Myf’s tail into the straw. Bob picked up the piglet, rubbed it dry with a towel and then placed it by Myf’s row of teats. It latched on immediately and begun sucking. Myf made no move to lick it or interact with it at all. “Sows don’t,” said Bob, “but it doesn’t mean they aren’t hugely protective of them.”

Myf gave birth to nine piglets over four hours. Three were stillborn but six survived and she proved to be the most wonderful mum. “It may have been two years since she last had a litter,” said Bob, “but she certainly hasn’t lost the knack. Congratulations on your first litter!”