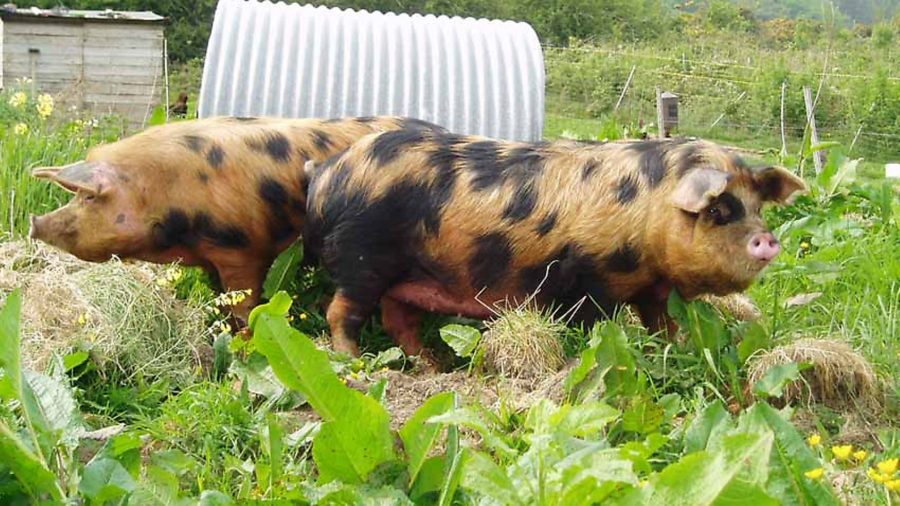 Of all the breeds of pigs I’ve kept over the years the Oxford Sandy & Black remains my firm favourite. In fact, I would go so far as to say it’s undoubtedly the most suitable breed for the smallholder. We bought our first weaners – a pair of gilts – from the previous owners of the Ascott Smallholding Supplies company. They used to send around a chatty little newsletter to all their customers, in which we read that their OSB sow had produced a nice litter. We were living on Bardsey Island at the time, but, despite the logistical obstacles, decided that these were the pigs for us. Of the original pair, one we ate and the other was retained for breeding. We brought the sow with us when we moved back to the mainland, and subsequently purchased some more pure OSB gilts for breeding purposes. Generally we cross them with a Large White boar, which gives us good quality commercial offspring, but from time to time we have produced a pure-bred litter. We would have liked to produce more pedigree Oxford Sandy & Blacks, but unfortunately the exorbitant costs associated with registering small numbers of pigs with the British Pig Association effectively knocked that idea on the head. A pity, because our sows have produced some really good quality pure-bred piglets. In fact, we’re quite disillusioned with the whole business of pedigree pig production, to the extent that we probably won’t replace our sows when the last one finally succumbs to old age. The OSB is probably the least known of the minority pig breeds, though it surely deserves greater popularity. Thought to have originally developed from a cross between the old type of Berkshire and the Tamworth, the Sandy & Black is a medium sized pig with a lustrous coat of gingery hair (anything from pale honey colour through to a rich rusty red) dotted randomly with a good number of black patches and spots. This colouration is probably what gives it its alternative name of the ‘plum pudding’ pig. It has pale points (feet, tail tip and snout) as has its ancestor, the Berkshire, and lop or semi-lop ears. Sows of the breed are fairly prolific, and motherliness and temperament are first rate. The Sandy & Black is particularly good at utilising a poorer quality diet (e.g., waste vegetables and weeds from the garden), which is a great asset at a time when purchased feeds are so expensive SUMMARY* Believed to have been developed from a cross between the old type of Berkshire and the Tamworth, at Hook Norton, near Banbury in Oxfordshire, more than 200 years ago. * Also known as the ‘Oxford Forest’ and the ‘Plum Pudding’ pig. * Crosses well with a commercial boar. * Excellent temperament and mothering ability. * Ideal breed for the smallholder.