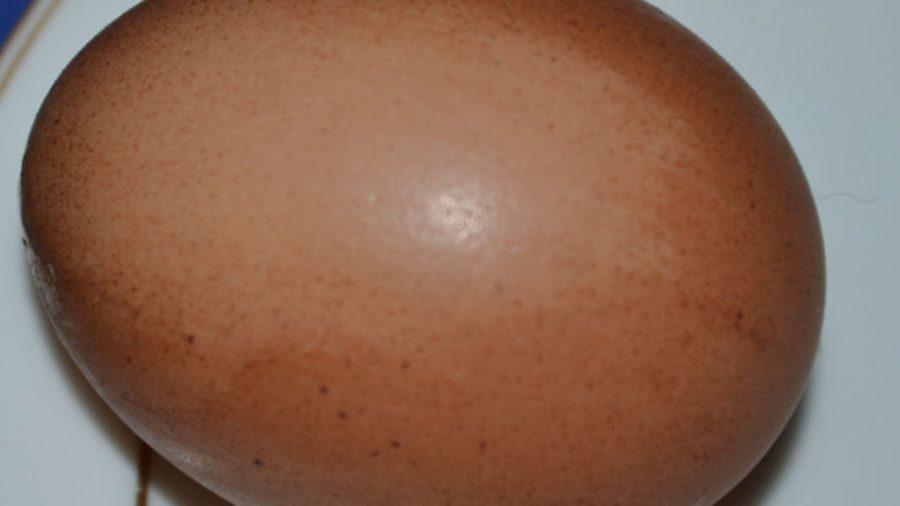 Tips for chicken keepers by chicken keepers; why eggs can lose their colour, what to do if you’re concerned about pecking and ex-battery hens laying eggs

Q: Recently I boiled an egg with a brown shell and the colour seemed to come off. So I was left with a partially cream shell. Why did this happen?

A: Charlotte Popescu says… Brown eggs are covered with a pigment called protoporphyrin which is actually derived from haemoglobin or blood. The brown pigment is added to the shell in the last 90 minutes before the egg is laid. The cuticle or bloom also gets added in this last stage. The egg shell is white to start with and so you will notice that the inside of the brown egg shell is still white. The pigment is a bit like a paint and can get rubbed or scratched off. Sometimes you will notice a brown egg can have scratches on the surface which is where straw of other bedding material has caused some of the pigment to come away. Some eggs, though, seem to have pigment which is much more difficult to remove which is why only one of your eggs lost its paint! The brown pigment obviously only gets added by those hens who are brown egg layers such as Welsummers, Barnevelders and Maranses in particular.

Q: We have had our ‘girls’ for 12 months and the pecking order was established very quickly, but over the last week we have noticed that Mavis is attempting to peck Sylvia. No damage has occurred yet and we have put anti-pecking spray on. This behaviour occurs both in and out of the run and it seems to occur when Sylvia invades Mavis’ space, or if she is digging a hole. It does not occur when feeding. The hens have recently come back from being looked after by a friend while we were on holiday, where they were in their own run, but we did not notice this behaviour until a week later and are sure we would have noticed it before. We have also checked them for red mite, lice and their vents are clean. They look very healthy and are laying daily. We are at a loss as to what is happening unless Mavis is trying to take over Sylvia in the pecking order. In your opinion, what is the likely cause of this and is there anything else we should be doing? They have layer pellets plus a fresh sweetcorn cob mid morning with pear or green veg mid afternoon and mixed corn in the evening.

A: Victoria Roberts says… A change of environment can spark new behaviour and a re-shuffling of the pecking order. But I also think that the maize (mixed corn) is encouraging aggression; this is a well-known effect of it as it is very heating – good in a harsh winter, but not in warm weather. Grain in the form of whole wheat would be better and stop the sweetcorn (i.e. fresh maize) as well, certainly until the weather gets cooler. Hanging up nettles or vegetables will give them something else to think about other than pecking each other. Since your hens have been on different ground, I also suggest you worm your hens with Flubenvet (the licensed product) plus you could put cider vinegar in their water one week a month as a prevention against all pathogens (plastic drinker only to avoid toxic leaching from galvanised, dose 10ml:500ml water).

Q: One of my three ex-bats went broody last year. I didn’t think battery hens ever went broody, but if she does the same this spring, would it harm her to hatch some eggs? Do you think she’d be a good mother, and would she know what to do?

A: Anne Perdeaux says… Broodiness has generally been bred out of battery hens, but occasionally one will start sitting. Some ex-bats have successfully raised chicks too, so anything is possible! It won’t harm your hen to sit on a clutch of eggs, and providing you want some chicks, this would be better than allowing her to remain pointlessly broody. She’ll need a separate little coop where she can hatch her eggs in peace without being bothered by the other hens. Try her on some pot eggs when you first move her – if she settles on these, she’s likely to sit for the full term, so replace them with fertile eggs after a couple of days.

With any luck she’ll follow her natural instincts and turn into a proper Mother Hen. Don’t disturb her too much, but make sure she leaves the nest once a day to eat, drink and do a dropping. Be careful not to interfere when the eggs hatch, but keep an eye on things to see if she is accepting the chicks. If not, you’ll have to beg, borrow or buy a heat lamp!