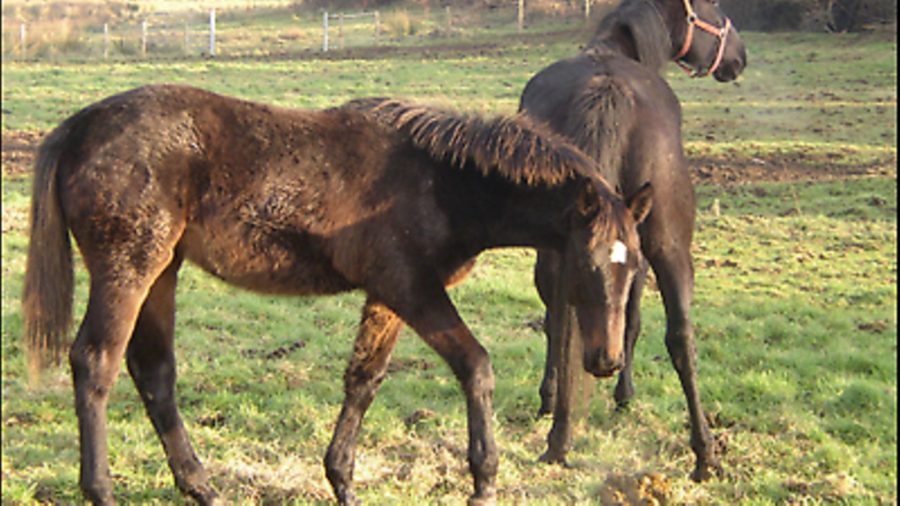 Wendy Findlay gives advice on how best to wean your foal

I toyed with the idea of letting Holly and Storm run together for the winter, but this would limit the amount of work I could do with Holly if she couldn’t be taken anywhere without her foal in tow. Our neighbour has left his mare and foal together for the winter, but he had no real need to separate them as his mare isn’t in foal again and he has no plans to bring her into work.Eventually a solution was found: my mother has two pony mares that could act as a nanny to Storm after weaning. First of all we brought Holly and Storm over and put them in the field with the two mares so they could all get aquainted. They all ran together for a couple of weeks, and then we simply caught Holly one day, put her in the horse box and took her back to my place. Storm whinnied a bit but was seen later on indulging in a bit of mutual grooming with one of the other mares, and so wasn’t overly distressed. Holly, it has to be said, didn’t even appear to notice that Storm wasn’t with her in the box. She went back in the field with Snowy happily. I kept a close eye on her udder to ensure that she didn’t develop mastitis. Exercise and a slight reduction in her feed helped the milk supply dry up, which it did very quickly.So, having thought I would go for the gradual approach to weaning, it ended up being just complete separation in one go. However, I feel this worked well for two reasons. First, we provided Storm some comrades to reassure him after Holly had left, and second, Storm was nearly eight months old when he was finally weaned and was already becoming increasingly independent of Holly.After weaningProviding company for the foal after it has been separated from the mare is crucial. As a herd animal, a foal is going to feel more secure in a group, even if it’s only some other weanlings. A few older horses and ponies in the group are of benefit as they keep the foals in place and teach them a few social graces.Most native breeds of foal should be able to winter out, especially if their field has some shelter and you continue to feed them properly. Good quality forage, such as hay or haylage, and a foal mix to ensure all his vitamin and nutrient requirements are met. More highly bred foals may need more cosseting – they will fare better if they can get under cover, either in a field shelter or in an open yard/barn system. Try not to stand a foal in a stable for long periods alone. This would be very unnatural for them and most likely encourage stable vices such as weaving and crib biting. Ideally, you should try to provide your growing foal as much space and freedom as possible so there’s plenty of opportunity for him to exercise himself. Worm him, feed him well (but not too well – over-feeding a foal with concentrates can lead to developmental abnormalities), attend to his feet, handle him regularly and enjoy watching him grow into a gangly yearling.Finally, remember to apply for a horse passport which all horses, ponies and donkeys are now legally required to have. I was able to apply for a passport from the Connemara Breeders’ Society. A vet came to complete an identification chart, insert a microchip and take a blood sample for testing to confirm parentage.